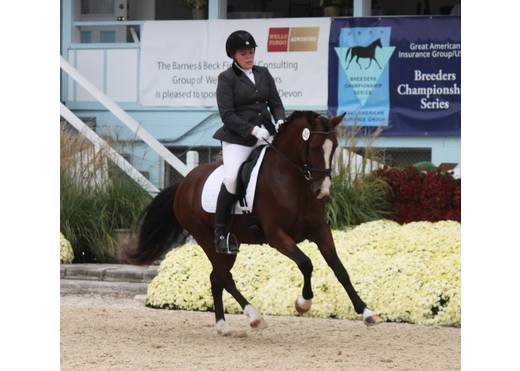 Phenix- ISR pony stallion- 14.3 hands- received his certified Breeding License with the ISR/Oldenburg NA Registry in September, 2015. He received many scores of 7, with his walk receiving an 8.  Approved Westfalen in 2018

Phenix has very correct conformation with a big shoulder, powerful hindquarters and big gaits. At his initial breed inspection, he received an 8.2 for movement. But his best feature is a calm and willing attitude.$850.00 cooled semen (NO COOLED SEMEN FOR 2019) $500.00 per dose frozen semen    website- www.joveeponyfarm.com

2015: At Raleigh Summer Dressage, he scored 74.8% and placed second in a very competitive Three-Year Old Colts and Geldings class, receiving great conformation scores with "8" for his walk. He then made his under-saddle debut at Dressage at Devon where he was competitive with his larger warmblood peers in the USEF/USDF Materiale Three Year Old Colts and Geldings class, earning fifth place with a score of 76.300%.

2014: As a two-year-old, Phenix earned the National Reserve Championship in the Oldenburg NA All-Breeds Awards, for Two-Year-Old Colts. He received a 9 for his walk: "clear rhythm, covers ground, uses topline well." And: "trot active, good use of hind legs, uphill tendency, attractive sportpony, strong loin and build." He qualified for the GAIG/USDF Breeders Championship with a score of 79.7, and at Dressage at Lexington he won the Pony Championship.

2013: Shown only once as a yearling, he placed second in the Yearling Colts and Geldings class at NCDCTA Labor of Love, with a score of 76.6.

2012: As a weanling, Phenix was National Reserve Champion in Adequan/USDF All-Breeds, ISR/Oldenburg Colts of 2012 (76.70%. and also finished 7th in USDF Year-end standings for All Colts of 2012. He was Reserve Foal Champion at VADA/NOVA summer breed show, which qualified him to compete in USDF/GAIG Final Foal Championship at Dressage at Devon. There he finished fifth with a score of 76.1.
Also at VADA/NOVA, Phenix won the breed class for all Oldenburg NA entries, of all ages, with a score of 77.1.

Presley won High Score Award and Premium colt at ISR/Oldenburg Inspection- score 8.1. Owners report- "We are loving the great mind on this colt".