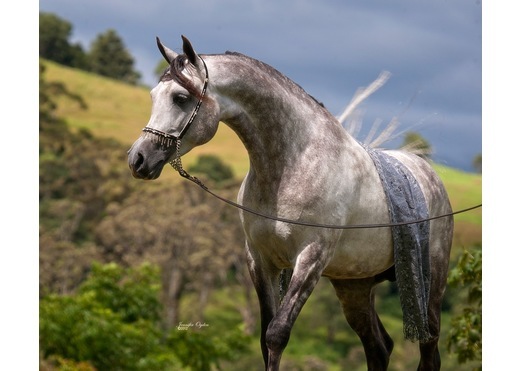 UPDATE: VP Ghazal is now approved for Shagya breeding in North America, in addition to Australia!

By Barabas NL (Nadejni RU x Barhatnaja RU), out of Valinor Park Geisha, Ghazal is 4th generation Valinor Park (Australia) breeding. VP Ghazal is a Platinum Champion and multi-Gold Champion at Halter at some of Australia’s most prestigious shows, including the Australian National Championships, East Coat Championships, National Stud Show and National Capitol Show amongst others.

In 2012 Ghazal was sent to Brookeleigh Stables where he successfully competed in endurance. Whilst in Qld he stood at Sheikh Mohammed's Gherulla Stables for 2 seasons, and his progeny are now commencing their careers in Australia and the ME. Like his sire, Barabas NL, he has exceptional heart rates and beautiful movement, which he passes onto his progeny, and VP Ghazal is now the only remaining son of Barabas NL available at stud.

VP Ghazal is one of only two Arabian stallions in Australia licensed by the European Shagya association to cover purebred Shagya mares. He scored 8.5 out of 10 when he was classified.

Ghazal’s bloodlines are unique in North America and as such, he provides an exceptional opportunity for astute breeders. He is the only son in North America of the straight Russian stallion, Barabas NL, who was bred by The Kossack Stud in the Netherlands, and who stood 15.2hh. His pedigree boasts some of the very best of Russian bloodlines of recent years. Much sought after for his endurance progeny due to their outstanding recovery rates, soundness and courage, Barabas NL has a number of his offspring competing successfully both in Australia and overseas. Barabas is the sire of Serjai (VP) a Junior WEG winner as well as numerous winners in the ME and Europe in endurance. Barabas NL progeny have been highly successful in the show ring, including numerous East Coast Gold Champions at Halter, Gold Australian National Champions at Halter, AAA Halter Champions as well as Top 10 Australian Champions. He is believed to be the only stallion in the world to have sired a World Champion in both endurance and a National Halter Champion.

Ghazal’s dam line represents a highly successful cross of Polish/Egyptian and Australian Crabbet lines. Valinor Park Geisha was a beautiful mare with a highly successful show career, who sadly was lost too early due to a tragic accident. Her sire, Saracin UK, was bred by Halsdon Arabians, and was imported to Australia by Valinor Park, and is line-bred to Palas through his son Gondolier, (who was the senior sire at Magnuss Arabians in Nth America). Saracin’s Polish ancestry boasts a 2-time winner of the Polish Derby, whilst he also has an infusion of Egyptian blood through his mare lines. A dash of Russian influence has resulted in an Arabian who has extreme athleticism, combined with a beautifully balanced and correct body and that unmistakable Arabian 'look'.  Geisha’s dam, Valinor Park Grace, was the daughter of the original matriarch of Valinor Park. Ralvon Fidelity, herself a prolific AA Halter champion, Junior Australian Gold Champion at Halter and a daughter of the Supreme International Champion, Ralvon Pilgrim, founded a dynasty which today includes numerous winning endurance horses and AAA Halter Champions. Grace’s sire, Oasis Desert Song, was the first stallion in Australia to achieve the Supreme status in the “Arabian Roll of Merit”, through Championship status in Halter, Working and Progeny, and was described as the ‘ultimate saddle horse’. He is the sire of many successful endurance horses in Australia, with several also being equally successful in the showring; hence the Valinor Park motto was born: “Beauty That Endures”. Desert's career in endurance earned him 3 Quilty buckles, including 3rd in 1982, the first stallion in 16 years to place in the Top 5, and an 8th in 1983. He was renowned for his exceptional heart rates, with one son, VP Armistice, a twice WEG competitor, still holds the record for vet-gate-into-hold of 28 secs.

Valinor Park Ghazal is the ‘sum’ of all the important influential Arabian performance lines in one unique pedigree – a stallion who is bred to breed on, with characteristics most important, not only for the Halter ring, but also in the demanding competition of endurance.