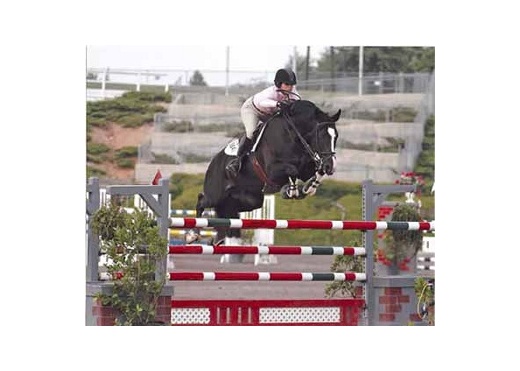 Richard is an imported KWPN stallion with a strong sport horse pedigree. Richard is the son of Kroongraaf whose sire, Burggraaf is considered one of the most successful sires. Burggraaf, himself, jumped at the international level. Richard’s sire’s dam, Rianne, can be considered as one of the best Dutchdams ever. She is the full sister of the international jumping horse, Optiebeurs Surprise and in combination with four different stallions she producedno less than three international show jumping horses and two licensed stallions, Kroongraaf and Candy Surprise (Candy Boy). She is the dam of Katie Monahan-Prudent’s great show mare, Belladonna.  Richard’s dam, Cendy comes from the Dutch mare line, fokfamilie 69, which has produced several licensed stallions and numerous horses successful in sport. She is by the important stallion, Le Mexico, and she is a ¾ sibling to the great stallion, Ulft.  Richard is the ultimate “equine athlete” and he brings the full package – pedigree, athleticism, good looks and a fabulous temperament. He has been successfully shown in both the Hunter Ring and the Jumper Ring including the Grand Prix level in the US. He has grand champion wins on the AA circuit in both Green Conformation Hunter and Regular Working Hunter. Richard was also shown in Holland in the Jumper Ring prior to his importation to the US in 2004.  Richard is also siring “equine athletes” who are inheriting his looks, his athleticism and his temperament. Richard has one limited crop in Holland, born in 2004, and from this first crop, he has offspring who are competing successfully in Holland through 1.3 meter jumpers, eventing and dressage. His first US offspring were born in 2008. He crosses well with both TB and WB mares alike.

In the United States:

2004 Mare by Richard showing in Poland

2004 gelding by Richard in Holland