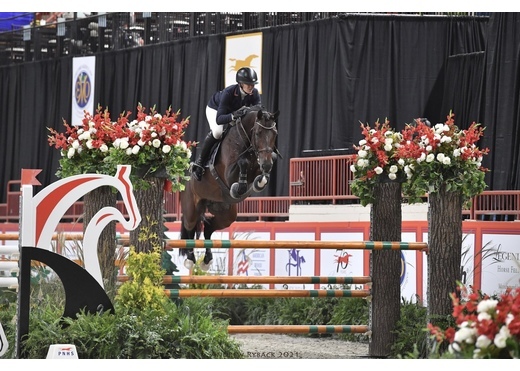 Scope never gets old and that is something that Lord Fauntleroy undeniably passes on to his offspring. Lord Latino is a typical son of Lord Fauntleroy; light-footed, athletic ability and good reflexes. At the stallion show of the Deutsches Sportpferd (DSP) Lord Latino therefore gained a positive result and was awarded as Premium Stallion.

Sire Lord Fauntleroy by Lord Pezi/Contendro out of the breeding program of ZG Kern in Neuhausen, Baden-Wuerttemberg, is viewed as one of the interesting newcomers from the Hannoveraner perspective. In 2011, the typy bay stallion was one of the striking jumper stallions at the licensing in Verden. In 2014, he won the Hannoveraner jumper horse championships. Now Gilbert Böckmann and Marcos Kutcher have competed the stallion (owner: Wolfgang Brink- mann, Herford) internationally to 1m60. Last spring, he won the Nations Cup in Uggerhalne, Denmark, with the German team. Lord Fauntleroy has not been used much for breeding. Hence his positive breed value of 149 is even more so exciting.

Lord Latino has an extremely strong motherline, dam Piritta, by Quidam’s Rubin has already produced the 1m60 jumper Colmar (by Colestus) who has been successful with Shane Breen and Jack Ryan in the GCT.

2022  Avaliable Frozen and Fresh. Discount given to mares with proven sports results above 1m40.

Lord Latino (as Little Fauntleroy) received his approval for DSP and was awarded as Premium stallion. He is a modern type jumper with a lot of athletic scope and tremendous strength and length of stride in the gallop and quick hind leg in the trot. He is light-footed, careful and has a great attitude. Also in Hannover, Westfalia and Oldenburg they saw Lord Latino’s qualities and he got approved for these world class stud books as well.  In 2020 as a 7yo Lord Latino has been successful competed up to the 1m40 level and shows all of the aptitude to continue to progress towards the Grand Prix level.

Lord Latino's first foal crop arrived in 2017 with many accolades and they are now just starting to compete in Germany with several top placing in the young horse classes.  From his first foal crop a colt out of a Lancer III dam was awarded the Westfalian Foal Champion.