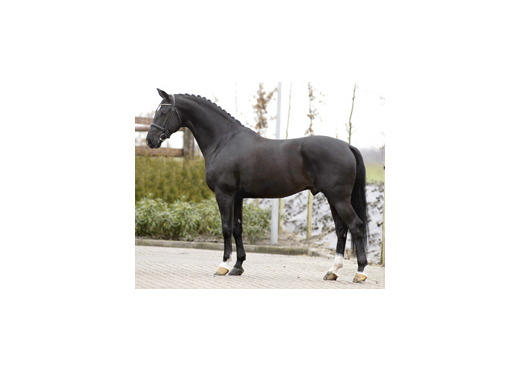 At his Stallion Performance Test Negro was Reserve Champion overall, earning exceptional praise for his canter which scored an 8.5.  Negro won his KWPN Stallion Show competitions and was the highest placed Dutch horse at the 2001 FEI Young Horse Championships.  By age 7 he was winning at Prix St. Georges and had a remarkable talent for all the Grand Prix work.   Olympic rider Anne Van Olst calls him ‘the best horse I ever rode.’

Negro offspring have proven time and again that they have the talent for the FEI work with offspring winning at the FEI levels with both professionals, amateurs, and young riders.  An exceptional canter, active hindleg, and talent for collection are consistent across his offspring.  Due to the world-class quality of his offspring, Negro has been awarded the coveted Preferant status by the KWPN and was the 2017 KWPN Stallion of the Year.