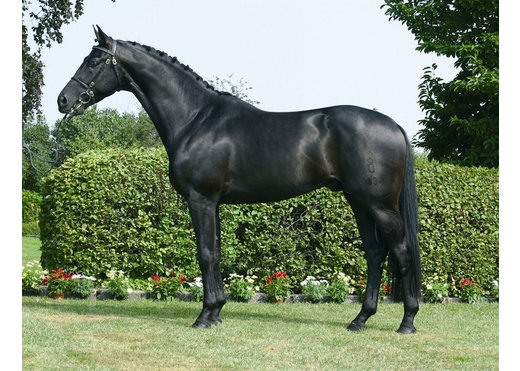 Soprano: A beautiful type with very correct conformation and excellent feet. He received 10 for character and  9 for rideability at his 70-Day Test in Neustadt Dosse, Germany. Soprano is a proven sire noted for stamping his offspring with excellent movement, elasticity, rideability, jumping ability, super character, and dark coat.

Soprano is a proven sire of top international horses.  From the World Championships for Young Dressage Horses to multiple National Championship high placements and wins in the USA and Sweden, to the World Equestrian Games, to International Grand Prix Winners (Qualifier for the World Cup), to the Brilliant Ring in Rasteded, to States Premium and Gold Medal mares, to offspring sold at the Vechta Elite Auction, to very successful Event Horses up to Intermediare, to offspring competing in the Jumpers...the successes of Soprano’s offspring speak for him as a top sire.

Soprano is EVA Negative and has been tested for Warmblood Fragile Foal Syndrome (WFFS) and determined to be N/N, i.e. he does not carry the gene mutation.

OFFSPRING are modern in type inheriting his beauty, elegance, elastic movement, correct conformation, outstanding temperament, athleticism, and dark color. Not only do they show great talent for dressage, they also show a great deal of scope and style over jumps.  Soprano has been a very consistent producer of top offspring in Sweden, Denmark, Germany, and the United States and Canada.