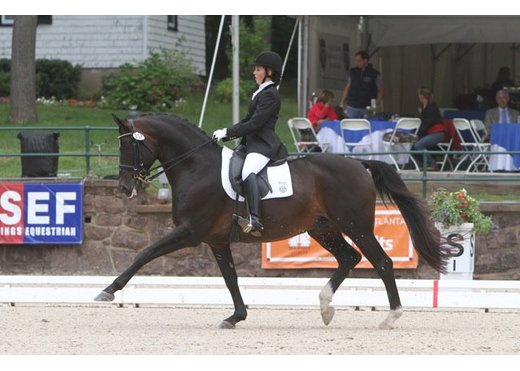 USDF Horse of the Year, Pan American Games gold medal team member and FEI dressage superstar. Pik L was 100-day tested and licensed in Germany with an overall score of 128.6 – 4th place. Among the highlights were an 8.0 on character and temperament, 9.0 on his rideability and an 8.0 on his canter. Currently, Pik L has received two stars from the ISR/OLD, -/*/*/-/-.

Pik L is an exceptional athlete and an extraordinary sire. Each year this stallion produces foals that inherit his amazing athletisim and temperament. These foals become horses with great talent and rideability. His proven track record as a sire shows not only in the dressage ring but with the blood of Pik Koening, also shines over fences.

In addition to maintaining a busy breeding schedule, Pik L has trained and shown successfully through Grand Prix. For years, Pik L dominated the small tour (Prix St. Georges and Intermediaire I) at prestigious shows on the East Coast with scores in the 70s. This culminated in the USDF Horse of the Year and a sweep of Dressage at Devon. Pik L showcased his tremendous temperament by winning the team gold medal and first place individually with Noel Williams at the 2005 USDF Junior Team Championships. The following year, Pik L swept the juniors again, this time with Emily Wagner.

Pikko del Cerro HU was honered as the 2009 Markel/USEF 6 Year Old National Dressage Champion. At 2009 Dressage at Devon this handsome stallion was awarded the prestigious Stallion Championship. Under saddle he continued his Devon dominance winning all 6-Year-Old classes and scoring above 85%.