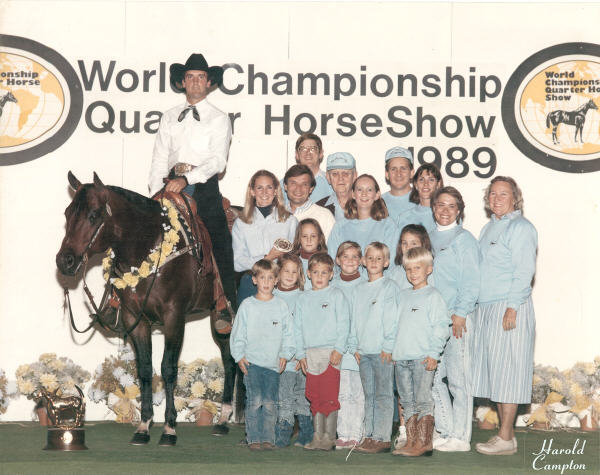 Most women who own horses can say they were born with the “horse lover gene” and that it’s been with them their entire life. Ann Myers, owner of the AQHA World Champion stallion, Zips Chocolate Chip (photo left), is no exception. Though she was born a city girl in Dallas, TX she always dreamed of having her own horse. She took riding lessons as a little girl and then at the age of 10 her father’s friend gave her the first, but definitely not the last, horse she would own. Since she was a little girl she had always dreamed of living on a farm and having her own breeding program but it wasn’t until 8 years after she married her husband, Phil, that this dream came true.

Phil and Ann settled in Ashland, OH with a few mares she had shown. “It was fun to raise their foals knowing the mares as well as I did. Their foals were a lot like them.” Three years after they moved to the farm their mare, Fancy Blue Chip (Custus Jaguar x Irene 3), gave birth to a colt by the AQHA Hall of Fame stallion Zippo Pine Bar on Cinco de Mayo. That colt was Zips Chocolate Chip (photo middle right at 29 years old with Ann). Ann said, “He was a very pretty colt but we had no idea we had just won the lottery! I thought he was a perfect mover when I watched him play in the field. He was always balanced like a ballerina. But, I didn’t know how he would compare to other horses until he showed in his first futurity, the Texas Breeders Futurity, as a two year old where he won 1st under all 5 judges.”

Zips Chocolate Chip went on to achieve an almost flawless show career and became an AQHA World Champion in Jr Western Pleasure by placing 1st under all 5 judges. He was trained in Texas and during his show career he also became a breeding stallion.  “He left our farm for Texas when he was 2 years old. Then he became too famous for us to bring him home,” Ann said. So it was decided that once retired from competition he would remain in Texas to stand at stud.

The goal of the Myers’ breeding program is to raise show quality horses that are pretty as well as a joy to work with and ride. Ann said, “We want to continue the Chocolate Chips because horses and chocolate are important ingredients for our success!” Along with Zips Chocolate Chip they also raised Zippo LTD (Zippo Pine Bar x Ima Blister Bug) who was AQHA’s All Time Highest Point Earner in the history of the AQHA when he retired from showing at the age of 20 years old. Another measure of their success is evidenced by the four inductees they have into the National Snaffle Bit Association’s Hall of Fame: Zips Chocolate Chip was inducted both as a show and breeding horse, Ima Blister Bug (Ladybugs Charge x Pats Dee Bar) as a breeding horse and then both Zippo LTD and Zippo By Moonlight (Zippo Pine Bar x Ima Blister Bug) as show horses. 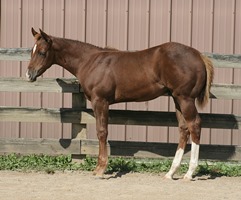 Several years ago Ann had the foresight to freeze semen from Zips Chocolate Chip. She chose Select Breeders Southwest in Aubrey, TX to freeze his semen because,

“They have been ahead of the curve in the equine frozen semen industry for a long time. They are professional and very helpful to their customers. We have shipped his semen overseas for years. Now that he is retired from breeding, we are using his frozen semen domestically to continue his legacy.”

After 26 years of being away from home and siring well over 1500 foals, Zips Chocolate Chip retired from breeding. In July 2013, at 28 years old, Zips Chocolate Chip made the journey back to Ohio. Back to the farm where it all began so he can live out his remaining years with Ann and Phil. Due to their freezing his semen when he was younger his legacy will live on via frozen semen processed by SBS. This past year the Myers’ welcomed two frozen semen foals by Zips Chocolate Chip, a colt named Chocolate Gladiator (photo left; out of Miss Joey Gladiator) and a filly named Countess of Chocolate (out of PR Cigold). They look forward to welcoming many more Zips Chocolate Chip foals in the future.