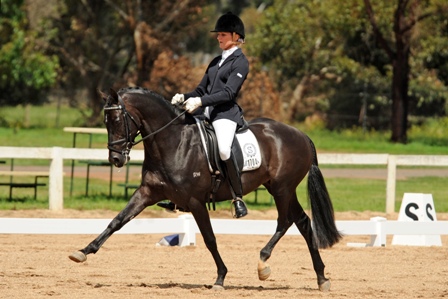 Debbie McKay competed in Eventing and Showing for many years, but one day decided her heart was just no longer in it and instead she put her competition mares in foal, and so began Aspen Way Stud in 1998. The breeding goal is to produce horses and ponies of international quality for Australian buyers, so they don’t have to take on the risk and expense of importing stock from abroad. Deb laughs, “Since making this my business philosophy, quarantine fees have doubled … along with the European prices, so this has certainly worked in my favor”. However, the success of her breeding program is best represented by many major awards in the show ring and the growing success of her homebred stallion, Aspen Way Gala Night (left, photo credit Julie Wilson). 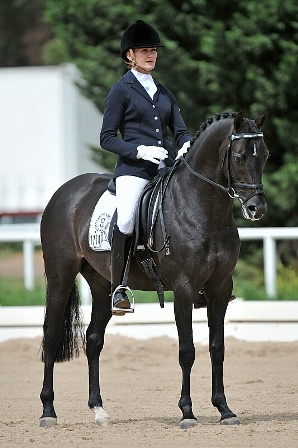 In his short but illustrious career Gala Night has set the standards that others look to achieve! He is a Multi Supreme Champion at Royal Shows across Australia and at the 2010 Royal Melbourne Horse Show he was awarded Supreme Champion In Hand Exhibit and Champion Ridden Exhibit beating some of the best horses in the country. He asserted his dominance in the Dressage arena, winning both the Novice and Elementary Championships at the 2010 Saddleworld Dressage Festival. It is clear there will be even bigger accomplishments on the horizon for this pony!

After receiving interest from breeders in both Australia and Europe, Deb made the decision to have his semen collected and frozen for export and domestic use, taking Gala Night to SBS affiliate lab, Goulburn Valley Equine Hospital in Victoria, Australia.

“GVEH is well known for its efforts in equine reproductive research, their facilities and expertise are second to none. The use of frozen semen has allowed access to mares in other states of our country without the worry that the semen will arrive on time (like with chilled or fresh semen). Plus mare owners all over the world now have the opportunity to utilize this stallion in their breeding program. It is reassuring to know I have my semen collected and stored with SBS - rules and regulations vary for different countries and SBS takes care of it all for me”

“But the biggest asset in using frozen semen is that it has made it possible to offer Gala Night for breeding at any time of the year without interrupting his training or competition program.”

For Further information on Gala Night and Aspen Way Stud, visit their website.