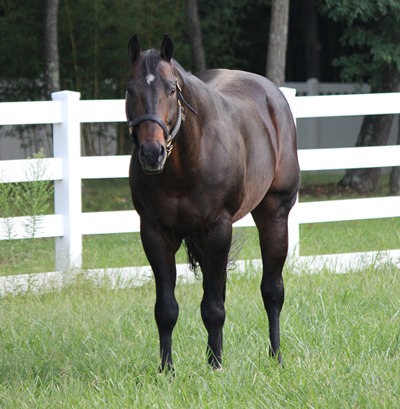 Becky Bailey of Batavia, OH began breeding Quarter Horses more than 15 years ago. Her dream then was to buy a few broodmares in order to build a small business so that one day in the future she could run the breeding farm after retirement. Little did she know that this dream would lead to her owning, One Hot Krymsun (photo left), one of the top Western Pleasure Quarter Horses in the world.

She bought her first broodmare in 1999 along with another mare for the purpose of showing. However, the show mare eventually became a broodmare as well. When Becky began this endeavor she didn’t realize the amount of time and expense required to breed horses but it was the science of breeding that fascinated her the most. She said, “At every breeding farm I visited, I spent hours watching, learning and asking questions. This included my visits to Select Breeders Southwest (SBSW) in Texas.  The staff there was always very willing to share their knowledge and answer questions. Eventually I felt they were a part of my breeding team. I have learned so much over the years but still feel as though I am constantly learning more. This is a very exciting industry and Select Breeders Services (SBS) has allowed me to be on the scientific leading edge of it.”

Becky first visited SBSW in 2001 after her stallion, One Hot Krymsun (Invitation Only x Krymsun Jet Set) won the AQHA World Championship in the Two Year Old Snaffle Bit Western Pleasure. She felt he was a born show horse and still had a lot of wins in him. She didn’t want to retire him from the show ring quite yet. The staff at SBSW taught him how to collect off a phantom and processed his frozen semen.  Becky said, “They did such a fantastic job. We had a very high rate of pregnancies from that semen which included One Hot Krymsun’s first World Champion, Hot N Trouble (Palomino Open Longe Line World Championship). 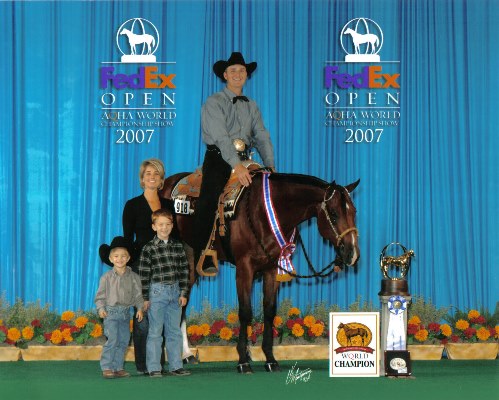 Hot N Trouble was out of the mare Really In Trouble which was bred at SBSW in Texas on her foal heat. And she took on the first try.” His first AQHA World Champion was Cool Krymsun Lady (photo right; out of the mare Cool Lookin Lady). She won the 2007 AQHA Two Year Old Snaffle Bit World Championship. Becky’s intuition to have his semen frozen and continue to show him was correct as he went on to become a three time AQHA World Champion, four time Congress Champion and a three time Congress Reserve Champion.

Along with SBSW in Texas, One Hot Krymsun has also visited SBS in Chesapeake City, MD throughout the years. Due in part to the availability of his frozen semen for export to three continents, he has been named the #1 sire in Europe by the Deutsch Quarter Horse Association for the third year in a row.  The photo below, left is a 2015 filly (One Hot Krymsun x Gotta Hot Ticket) born in Germany.  Becky said,


“Since 2001 we have gone back to SBS to collect and freeze semen in the off breeding season. This has allowed us to not only reach a worldwide market but also reduce the amount of insurance we carry on the stallion. Clearly we will be back to SBS in the future as we have the utmost confidence in their ability to freeze and store a high quality product. In addition, their network of labs gives us assurance that the semen will be handled and stored carefully at any SBS Affiliate throughout the world. They provide a professional presence to our customers in other countries.” 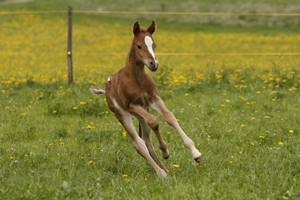 When asked about the goal of her breeding program Becky said it is threefold: make a profit, improve the breed, produce and sell winners. She said that the first goal of her breeding business is to make a profit. Her husband always says, “we can sit in the family room and break even.” Thus, with all the hard work, time and investment that goes in the breeding business a profit is important. Becky mentioned, “Anyone can manage a successful breeding operation that loses money. The real challenge is to run one that sustains itself.”

She expressed that a close second to making a profit is to improve the breed by improving her own foals, whether it be Quarter Horse, Paint Horse or Appaloosa. She strives to achieve this goal by breeding the best mares she can afford to the best stallions in the industry which have proven themselves as superior individuals in the show pen and/or breeding shed. This means that she may breed to lesser known stallions even if breeding to a popular stallion could make it easier for her to sell the offspring. She said, “For example, although I care about marketability, I don’t breed to stallions that are popular just because the foals should be easy to sell, if they exhibit qualities I don’t think improve the breed. If a stallion consistently sires short-strided or bad-minded foals, I will steer clear of them entirely. I like a horse that 1.) is fluid in its movement and rhythmic in its gaits, 2.) has a reasonable length of stride for its size, 3.) is athletic enough to perform in many events, and 4.) is trainable, fun to be around, and can bring joy to future owners.” 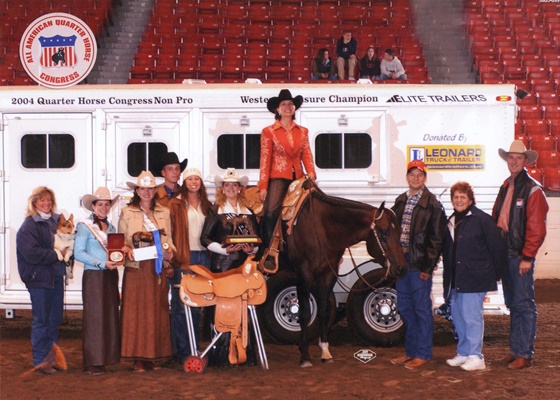 The third goal for Bailey Farm, LLC is to produce and sell winners which helps to increase the value of her “brand”. This means maximizing the percentage of winning show foals. Of the 100 plus foals they have raised themselves at Bailey Farm, over 80% have gone on to be successful performers, and 10 have gone on to become Congress Champions/Reserve Champions. Along with that success they have also been given the accolade of reaching the AQHA Leading Breeders List for the past several years. Becky (photo right; riding One Hot Krymsun) feels this is quite an accomplishment because others on this list raise much larger foal crops. As if that wasn’t enough, One Hot Krymsun as sired over 125 World/Congress/National Championships and Reserve Championships throughout the world and the two brothers the Baileys raised, Repeated In Red and Red White N Good, are well on their way to becoming successful sires as well.

So, what started as a dream for a retirement project has become a full scale horse breeding operation. One which occupies Becky’s time now that she has retired early.