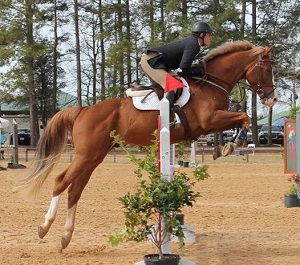 Steve Joyce’s farm, Cabin White Farm, in Guilford County North Carolina gets its name from a poem written about the rich history of the revolutionary war in that area. Steve’s love of horses began as a teenager when he would muck stalls at a local stable after school that hosted hunter shows, horse trials and local hunt club events. He fell in love with the sport horse and began to take an interest in foxhunting. He said, “I love many things about the sport including a handsome field hunter. I took a particular interest in the cross-bred hunter, the crossing of thoroughbred and draught horses, to produce a horse with plenty of blood and constitution.” This love is evident in the athletic offspring produced as a result of the breeding program at Cabin White Farm.

It was more than 17 years ago that Steve ventured into the world of sport horse breeding. He began by crossing his thoroughbred mare with Registered Irish Draft (RID) and Irish Sport Horse (ISH) stallions as they were much appreciated in the sport horse world. His breeding aspirations began simple enough with the goal of producing a nice crossbred type hunter. However, his goals have evolved as much as his breeding program. Today, Steve said his goal is to produce a horse capable of competing at the highest level of sport, particularly in eventing. Interestingly, though the goals may have changed, the bloodlines he began with all those years ago are still a large part of his breeding program today. 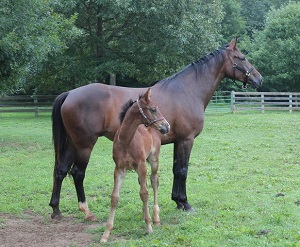 Each “Irish cross” offspring he has produced traces back to the stallion Skippy RID (aka Skippy; Legaun x Rose). Originally, he used full draught sons of Skippy in his breeding program but while exploring for other stallions he came across an ISH son of Skippy’s named Jumbo (Skippy x Betty). Steve said, “Jumbo already had a bit of thoroughbred blood and when bred to a thoroughbred mare he produces a really nice type sport horse.”

The old adage of “everything works out in the end” was true for Steve when he was unable to get his own mare in foal to Jumbo. Not long after his unsuccessful attempts the agent for Jumbo offered two thoroughbred mares already in foal to the stallion. So Steve purchased both of them which resulted in two nice fillies. Steve said, “The second filly hit the ground the weekend the mare, Headley Britannia (Jumbo x Alans Bambi) was winning Badminton. She and Lucinda Fredericks had already won Burghley and would go onto to win our Rolex. These three events make up the “Grand Slam” of international eventing. Headley Britannia was by Jumbo as was Avebury and a still growing list of top level event horses. No two ways about it, the birth of Cabin Lore (photo above right; Jumbo x Dawn On The Delta) that Badminton weekend was a catalyst for me focusing and re-calibrating my breeding goals.” Steve went on to say, “We are really excited about the horses we are breeding at Cabin White Farm. Having Jumbo’s bloodlines in our program is something we are very proud of. He has been a perennial top producer of event horses for many years and is currently ranked at or near the top of British Eventing and WBFSH stallions. Combining those lines with attractive thoroughbreds and warmbloods, we think promises a bright future.” 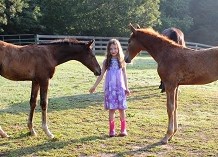 Their young stallion, Cabin Master (Photo top left; Quissini x Cabin Lore) carries the lines of Jumbo, Quidam de Revel, Cassini l, and some really important thoroughbred lines such as Bold Ruler, Hoist The Flag, Double Jay and others. Steve said, “Some modern sport horse breeders may not yet recognize the value of some of these lines but they are found in some very accomplished horses of the past and are re-emerging in a number of international breeding programs. Cabin Master is approximately 60% blood, so the resulting offspring of a thoroughbred mare would be approximately 80% blood...An ideal type for modern eventing. We think Cabin Master has a lot to offer North American Breeders.”

“We felt it was important for us to partner with a well-known and well regarded facility. SBS has a great reputation and breeders have confidence in them. Frozen semen has allowed us to offer our stallion while keeping him in competition and provided us with access to some world class horses that would not be available in this country otherwise. SBS Veterinary Services also assisted us in breeding Cabin Lore to Ramiro B in 2015.”

It is very rewarding for Steve that all of the horses resulting from their breeding program in recent years have ended up in the programs of upper level riders. The young ones are beginning their competition careers and it is exciting for them to watch their progress. They are very appreciative of the interest the eventing community has taken in their horses.