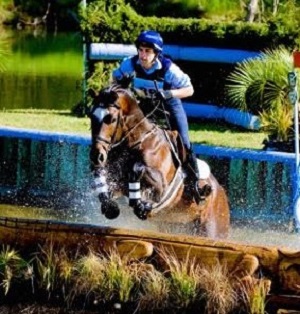 Christina Potter and her husband, David, began Northeast Trakehners, LLC in 1999. Their mission is “To import, breed, raise and sell Trakehner horses sound in mind, body and soul, true to the breed in conformation and athleticism for the purpose of pleasure riding or driving on through national and international competition of any equine discipline.”  Today, Northeast Trakehners, LLC. is proud to have bred and own several successful Trakehner horses which include their three stallions: Inamorato, Isamu and Marseille.

Christina’s ancestors originated in what used to be East Prussia in Europe which is where the Trakehner horse originated. Her parents immigrated from Germany to Canada in 1951, where Christina was born in 1952. The Hoene family decided to put down roots in Durham, NH. She grew up around horses and always had a keen interest Trakehners due to her family’s history with the breed. It was after she began researching her family history further, followed by a visit to reunited Germany, that she and David decided to begin Northeast Trakehners, LLC.

The first Trakehner they purchased is their Champion Mare, Pr St Indira XV (Fountainbleau/Mahagoni – Family of the Illustrious Isabella). During their business trip to Germany in 1999 the Potter’s visited the Keunecke family to see how they were rebuilding their farm after the reunification of the Germanys. Originally, they were interested in purchasing a young horse from the Keunecke’s bloodstock but were thrilled when they offered to not only sell them a Performance Tested Champion mare, Indira XV, but to sell her in foal as well. They did not hesitate to accept their offer and began to research stallions for her. They decided a young stallion named Buddenbrock (Sixtus x Ballerina XXV/Diamont) would be a perfect match.

The foal Indira XV was carrying became Northeast Trakehner LLC’s first stallion, Inamorato *Pb* (photo above). Inamorato has had many successes both competing and as a sire. He is a versatile athlete who has competed in many breed shows and hunter/jumper shows as well as eventing up to CCI* and Intermediate levels with Andrew Palmer. After a life-threatening injury, surgery and rehabilitation, Inamorato is competing in dressage with first place finishes in Third and Fourth Levels after which he has been honored with the *Pb* by the American Trakehner Association (ATA). His debut at FEI level is upcoming and a return to eventing is possible. Christina said, “His personal resilience, quality and what he produces is remarkable.”

Inamorato has several offspring competing successfully in Dressage and Eventing. For Keeps (Inamorato *Pb* x EH Hohenstein) is a young stallion prospect who is competing at Training Level in dressage and in his first competition was awarded over 68%. Lucinda *Pr* (Inamorato *Pb* x Unkenruf) has begun her new Eventing career where she finished 2nd place in the Area 3 Championships at Training Level this past June. 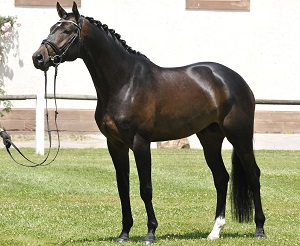 Marseille (photo right) Prince Patmos x Mireille Mathieu/Cosmir/EH Gribaldi) is their approved stallion in Germany who is contracted to Langestüt Zweibrücken. In Germany in 2013, he completed his 30-day test with the highest score of any Trakehner stallion tested that year. He then went on to complete in his 70-day test in 2015 where he earned 9’s and 8.5 for the final free jump phase. As mentioned by Christina, “Marseille’s foals have almost all garnered Premium Status and 2 have won their Regional Foal Championships.”

Another of their stallions is Isamu (photo below; Cosmopolit x Indira XV/Fountainbleau/Mahagoni). He is one of only two stallions from the Paint Trakehner stallion, Cosmopolit. As described by Christina, “Isamu stands 17.2, sporting 4 white sox and a phenomenally sweet temperament. Carrying Paint genetics, he is a valuable warmblood sport horse sire.”

When asked how frozen semen from her stallion’s helps her breeding program Christina said, “Frozen semen is there when you need it in the imperfect science of equine reproduction. It takes the timing of shipments out of the equation. The only thing you need is an appropriate storage facility at the receiving end and a talented reproduction veterinarian keeping track of your mare. Less Stress…success!” They have chosen to utilize the services of several SBS Affiliate Laboratories. When asked why SBS she said,

“The longstanding success and reputation of SBS drew us to them. Once we began discussions, the timeframe, communication, follow-through, knowledge and experience of the staff are second to none and the frozen semen from our stallions is in the best place possible. After all, the future rests so much in their capable hands and shipments.”

As mentioned, Christina and David have had the opportunity to work with several SBS Affiliate Laboratories. Due to his life threatening injury several years ago, Inamorato received care from Peterson and Smith Equine Hospital in Ocala, Florida.  During his stay, semen was frozen and qualified for export to the European Union, Australia, New Zealand and Canada by Peterson and Smith Equine Reproduction Center (PSERC) which has been an SBS Affiliate Laboratory for 15 years.

The Potter’s also utilized SBS in Maryland to process Inamorato’s and Isamu’s frozen semen for domestic use as well as to assist with the import of frozen semen from Germany for their stallion, Marseille. His semen is also available for export to Australia, New Zealand and Canada.

Through Northeast Trakehners, LLC., the Potters will continue to help promote the Trakehner breed, their capability and athleticism, throughout the world. With the assistance of the SBS Affiliate Laboratory Network, they will be able to continue the legacy of their prized mares and stallions for many years to come.