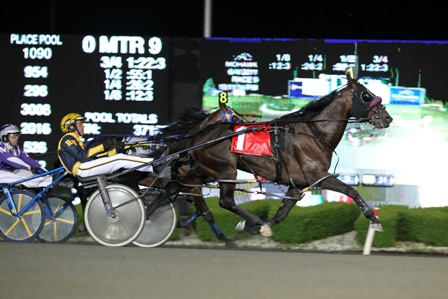 Winbak Farm is a long time client of Select Breeders and they are now next door neighbors to our new facility in Chesapeake City, MD. To and from work, our staff drives past Winbak's mares and foals out in beautiful green pastures, and we even get a glimpse of Standarbreds training on the track during their morning workouts. This month, we decided to feature Winbak and their annual yearling sale held in September. Elizabeth Lewis-House, marketing manager for Winbak Farm, gives us a glimpse of what goes on during the auction.

Winbak Farm is the second biggest farm in the standardbred industry. Being among the leading breeders in a competitive sport, the list of Winbak Farm graduate achievements is impressive. It includes several state/province champions and 3 United States Horses Of The Year. Every year Winbak Farm sells yearlings in the hopes of putting a champion in the hands of their buyers. In 2011, Winbak Farm yearlings will sell/have sold at 7 sales, including their own sale at their main farm in Chesapeake City, Maryland.

On September 16th, Winbak Farm held its 7th annual select sale, being sold were 48 of Winbak’s finest yearlings and 2 miniature horses. A majority of the yearlings were Delaware bred, which means they are eligible to Delaware’s stakes program for two and three year olds. The rest of the yearlings were part of the third crop of Winbak Farm’s young stallion Quik Pulse Mindale, who stands in Pennsylvania. The highest seller of the sale was Blush With Pride, a bay filly, who sold to Ben Stafford of Delaware for $18,000. Her ¾ sister, Badlands Jenna, was undefeated in Delaware stakes races at 2 and 3 for Stafford. The proceeds from the miniature horses were donated to Union Hospital’s Breast Health Center.

Wins by Winbak Farm graduates in 2011, include the $1 million Meadowlands Pace, the $500,000 Battle of Brandywine, the $500,000 Hoosier Cup, the $300,000 Max Hempt Memorial, and 6 of 8 $100,000 Delaware Stakes Breeders Fund Finals held this year. Winbak Farm graduates have also finished an impressive second in the $1.5 Million North America Cup, finished 2nd and 3rd in the prestigious Little Brown Jug (after finishing 1st and 2nd in an elimination heat), and have set both track and world records.

Winbak Farm would like to wish the buyers of its 2011 yearlings the best of luck. Winbak Farm yearlings, like their predecessors, are born to compete, raised to win.

The photo (courtesy of Winbak Farm) is Roll With Joe, Winbak's latest graduate to earn over a million!