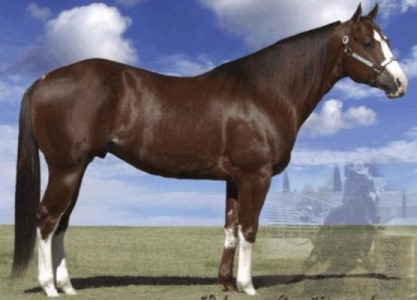 Courtney Cantrell lives in Goliad, TX and is a professional barrel racer who has racked up big wins on the rodeo circuit. She grew up in a rodeo family and says, “My dad, Marvin Cantrell, is a National Finals Rodeo qualifier and my mom, Cindy Gayle, was an intercollegiate champion and has owned several nice barrel horses. I have been riding my entire life. I continue to season a lot of young horses and plan to rodeo pretty hard in the future when the time is right.” She rides to win but for her it’s the people involved in the sport that mean the most. She said, “Winning a big competition is great but my proudest accomplishment has been meeting so many different people throughout the horse world and establishing all of these wonderful life time friendships.”

“His bloodlines were already proven and this particular cross was more than proven to me personally by my experiences with DJ Nick Bar.” Courtney recalls, “I was unsure as to exactly what direction we would head with As Good As Nick Gets but I knew he was a phenomenal animal displaying every credential needed to be a stellar athlete in the barrel racing arena and hopefully in the breeding shed as well. I wanted to make sure I had him in our possession regardless of his exact future.”

“At first I was just going to rodeo off of As Good As Nick Gets and we did win the first time out. He was just fantastic. I would run him without a tie down or a curb chain and I’d have total control thanks to his great mind,” says Cantrell. She continued to say, “But I knew I had to breed him and before long we were spending less time on the road and more time at the breeding farm.”

In 2012, Cantrell partnered with World Champion Barrel Racer and great friend, Lindsey Sears who became half owner of As Good As Nick gets. According to Cantrell, Sears has been instrumental in getting Nick trained to compete at the highest level of competition while also maintaining his breeding schedule. It was with this partnership that she saw the real potential for Nick begin to come together.

Cantrell points out that her stallion has a pedigree packed with the “greats” yet As Good As Nick Gets doesn’t have a trace of Dash For Cash bloodlines which makes him very unique in the speed horse market. They will actively promote him through professional barrel racing competitions. She says, “Our main goal is to be able to raise outstanding horses by As Good As Nick Gets and to keep his legendary pedigree available for many years through his offspring.”

“The most significant accomplishment we have had with As Good As Nick Gets to date would be having some of the best mares in the barrel racing industry bred to him repeatedly such as Baby's Blue Jeans, Sissy's Little Coin, Lady Perks, and Sheza Shawnee Bug only to name a few. We are very proud to have been able to bring As Good As Nick Gets out of full stud standing to competing and winning in less than a year. We consider having the 6666 Ranch in Guthrie, TX handling the breeding services of Nick a milestone accomplishment. We have enjoyed every moment of working with such a first class operation since the end of 2013. His breeding career will never be the same due to such a phenomenal and intelligent breeding facility!”

“Select Breeders Services gives us a guarantee that we are providing a quality product. We can manage our frozen semen easily. The abundance of knowledge that SBS provides to stallion and mare owners is unmatched! When you make a huge deposit into any financial institution you want the best bank in the world, we refer to Select Breeders Services as our best bank in the world. Our deposits are a little different yet very much the same!”

They began using frozen semen for many reasons. With Nick being an active performance stallion they were given the opportunity to freeze semen from him during the most convenient time which did not interfere with his barrel racing career. Cantrell says this has been less stressful on Nick and his body. She said, “We would like to continue to have his semen available to other countries. Managing his semen has been 100% effective through frozen semen. The number one reason to use frozen semen with As Good As Nick Gets is to be able to give our clients the satisfaction of knowing the quality of semen they will be using on their mares is tested, tested, tested and cleaner than any other alternative. We know exactly how great his semen quality is and do not have to worry about daily factors that might alter the quality such as when breeding with fresh or cooled semen.”