Cuoghi Quarter Horses is one of the top Quarter Horse breeding facilities in Europe. The beautiful facility where his horses are bred and trained is located in the Northern Italy town of Castelvetro, near Modena. Roberto Cuoghi’s passion has brought him incredible results in the international arenas for both the reining horse and cutting horse industries. In the late 1980’s Mr. Cuoghi purchased the stallion Snapper Cal Bar (Cal Bar x Cee Miss Snapper). This stallion not only is the founding stallion for Cuoghi Quarter Horses but also transformed the European Reining Horse Industry.

Once he purchased his foundation sire the next step was to locate mares which would complement this stallion as well as introduce bloodlines of other mares and stallions into his breeding program with the goal of producing outstanding performance horses. The resulting offspring would have to prove themselves in the show ring before they were incorporated into the breeding lines of Cuoghi Quarter Horses. Other mares and stallions were purchased from breeders and trainers in the United States in order to improve the genetics of the herd.

Master Snapper (Snapper Cal Bar out of Colonel Mistress) was the first Quarter Horse born, raised and trained outside of the United States to achieve a prestigious win across the ocean. One of his major accomplishments and certainly a pinnacle moment for Cuoghi Quarter Horses was when Master Snapper won the 2006 NRHA Open Derby ridden by his trainer Kelly Zweiffel scoring a 232. Since his win at the Derby he has stood in the United States. In 2012 his three year olds are achieving major victories in American reining competitions.

“From the very beginning of my activity in the Quarter Horse breeding business I used the services provided by SBSItalia. SBSItalia’s veterinarians provide the reproductive management service for my mares and stallions and have helped me to produce horses through advanced methods, such as the production and use of frozen semen and embryo transfer. The fact SBSItalia is part of an international professional organization has simplified my breeding program and has allowed me to produce foals out of Master Snapper both in Europe and in the USA. 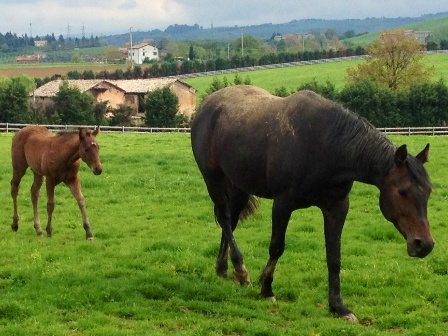 In fact, Master Snapper’s semen was initially frozen by SBSItalia then processed by Select Breeders Southwest in Aubrey, TX once he arrived in the United States. These two laboratories assisted me, in an extremely professional manner, with the export from the United States to the European Union of frozen semen of what is currently my best stud. Being able to use frozen semen of Master Snapper has allowed me to produce foals in two continents and market his genetics at an international level in an extremely easy way.”

To learn more about Cuoghi Quarter Horses, visit their website.