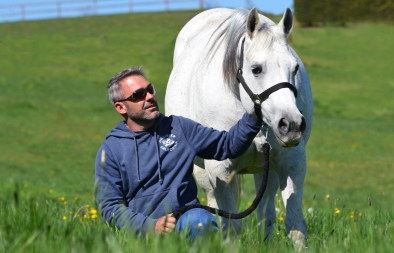 Haras de L’Hermet was founded by David Maisonette (photo left with the his mare, Charms My Name) in 1993. It is a picturesque Quarter Horse breeding farm situated on approximately 160 acres in the heart of the Loire gorges in Haute Loire, France. They offer many services such as breeding Quarter Horses and Paint Horses, equestrian tourism, boarding, import of frozen semen from the United States, brokering of frozen semen from American stallions as well as sales preparation of foals for futurities.

When he began his breeding operation he had several mares but his program really began to take shape when he purchased the stallion, Instant Impulse (Miss Material Girl x Impulsions), from the United States in 1996. He then imported Instant Impulse into France so he could begin breeding his mares and those of other mare owners. David said, “The goal of my breeding program is to consistently improve the quality of my foals by always breeding the best broodmares with the best studs in the industry. I believe correct confirmation is the pathway to excellent movement and a characteristic I look for in our foals.” He also mentioned that the best reward is when you start seeing the babies you produced begin winning in the show pen. One of those includes The Absolute Motion (photo below right; Absolute Option x Good Miss Motion). They have raised several champions in several disciplines including longe line, halter, and hunter under saddle plus many more. David also said, “We are also very proud to sell our offspring to the best riders and trainers in Europe. This year we even sold a baby to the United States.”

Importing equine frozen semen from the United States to the European Union can be intimidating for a mare owner who is not well versed in the process. This is where David steps in to help the dreams of these mare owners come true.

He contacts the stallion owners for his clients and coordinates with the import facility to make sure the process is smooth and the semen arrives in time for breeding season.

Along with assisting in the import process for the mare owners he also assists American stallion owners in the promotion of their stallion’s semen within the European Union (EU). He works very closely with several Select Breeders Service (SBS) Affiliate Labs in the United States as the agent for these stallions and once imported in the EU he stores the semen at Equine Services with Nicole Germann-Oberstein. David has actually been working with Nicole since he purchased Instant Impulse all those years ago when he decided to stand him at her station in Aschaffenburg, Germany.

For the 2015 breeding season he is representing the following stallions whose frozen semen is processed by an SBS Affiliate Lab: VS Code Red (Blazing Hot x Vital Signs Are Good), Whata Vested Asset (Hes Got The Assets x Whata Traffic Stopper), Zippos Sensation (Zippo Pine Bar x Satin N Lace), Mechanic (A Good Machine x Zippin Thru Town), Watch My Potential (Potential Investment x Watchit Im Good), Radical Rodder (Hotrodders Jet Set x Flashy Bar Flower) and Hot Ones Only (Invitation Only x Hot Shot Hit). Michelle Johnston, owner of Whata Vested Asset had this to say about David, “He has been an irreplaceable asset to me in Europe. My breeding season would not be as successful without him. His knowledge of the clinics and understanding of frozen semen along with his professionalism are much appreciated.”

David said this about his experience working with Equine Services and SBS,

“I appreciate the quality control SBS uses when processing frozen semen and the really good care they take of their customers. If you want to build up a good breeding program I highly recommend using SBS. I can also say that Nicole Oberstein of Equine Services does an amazing job and does her best to always make everyone happy.” 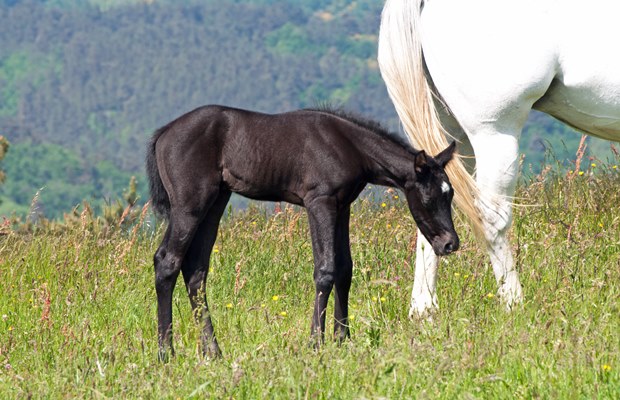 All of the mares at Haras de L’Hermet are bred with frozen semen. As of June 1st this year they had bred 11 mares and all of them are checked in foal. Pictured left is their 2015 filly (Lazy Loper x Charms My Name) conceived with frozen semen.  David commented, “I work with two excellent vets who were able to use fewer straws to breed one mare. This is also possible because of the quality of frozen semen produced by SBS!” He also said a big advantage of frozen semen for mare owners in Europe is that they don’t have to deal with the rush of trying to get semen when their mares are ready to be bred. If the mare owner or their veterinarian has a storage container the frozen semen can be shipped months in advance. However, even if a storage container is not available the semen can be shipped when the mare comes into heat so it’s at the facility at the time of ovulation.

David will continue to utilize the services of the Select Breeders Services Affiliate Lab Network as he strives to improve the quality of his foals by breeding to the best stallions in the industry.