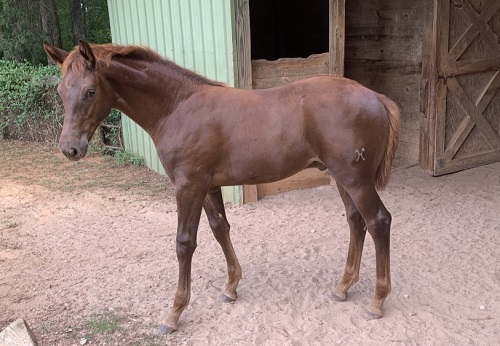 Meet “B” (photo left)! This 2021 colt is the result of breeding with frozen processed by Paul Loomis of Select Breeders Services in April 1990 from the Hanoverian stallion, Banter (by Bolero).

George Walker had the pleasure of growing up near Camden, SC which was known as an area for the winter training of Thoroughbreds. Because of this, Thoroughbreds were most often the pleasure or Sporthorses of the day for riders wishing to go fox hunting, riding cross country, or show jumping, jumpers or hunters.  His father became interested in the Hanoverians first through a family friend while George was working in the Thoroughbred racing world.  With their growing interest in the Hanoverians, and having lost a Hanoverian foal in a pasture accident, George paid Paul Loomis a visit at a large warmblood breeding farm where Paul was employed as the breeding manager. This is where he met Banter (photo below).

George was introduced to Banter in the field.  This is what he had to say, “I saw him and just knew he was the one. He was smaller than some of the others but I was drawn to him not only because of his looks but also because of the good amount of Thoroughbred blood on his sire’s side of his pedigree.”  George raised Banter and presented him for licensing as a 2-year-old and then again for his 100-day test.  He was subsequently approved as a Hanoverian breeding stallion.

Though he was familiar with the Thoroughbred world where only live cover breedings are allowed, George was intrigued by the work Paul was doing to preserve equine genetics through the use of frozen semen.  So, he decided to have frozen semen processed from Banter. The semen remained in storage for three decades until George decided to use it to breed his mare Roxxy (by Royal Prince).  Of his new foal George said, 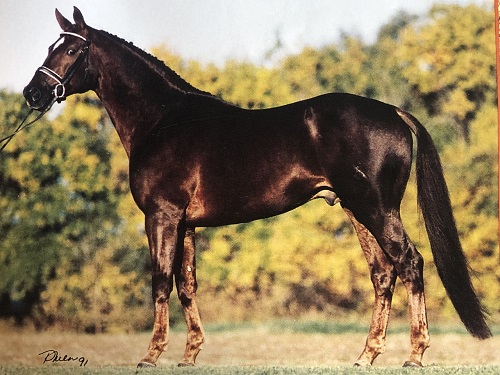 “I couldn't be more pleased with the result.  He is a handsome liver chestnut and is such a joy to be around, just like his father.  I believe he will be very rideable and I have given him to my wife Catherine as her next riding horse.  We call him “B” because that is what we called Banter around the farm.”

George said he still has a small amount of frozen semen from Banter in storage.  He plans to breed Roxxy again in 2022 in the hopes of obtaining a filly that will carry on Banter’s line. He said this will make the next generation  that much more special to him and Catherine.