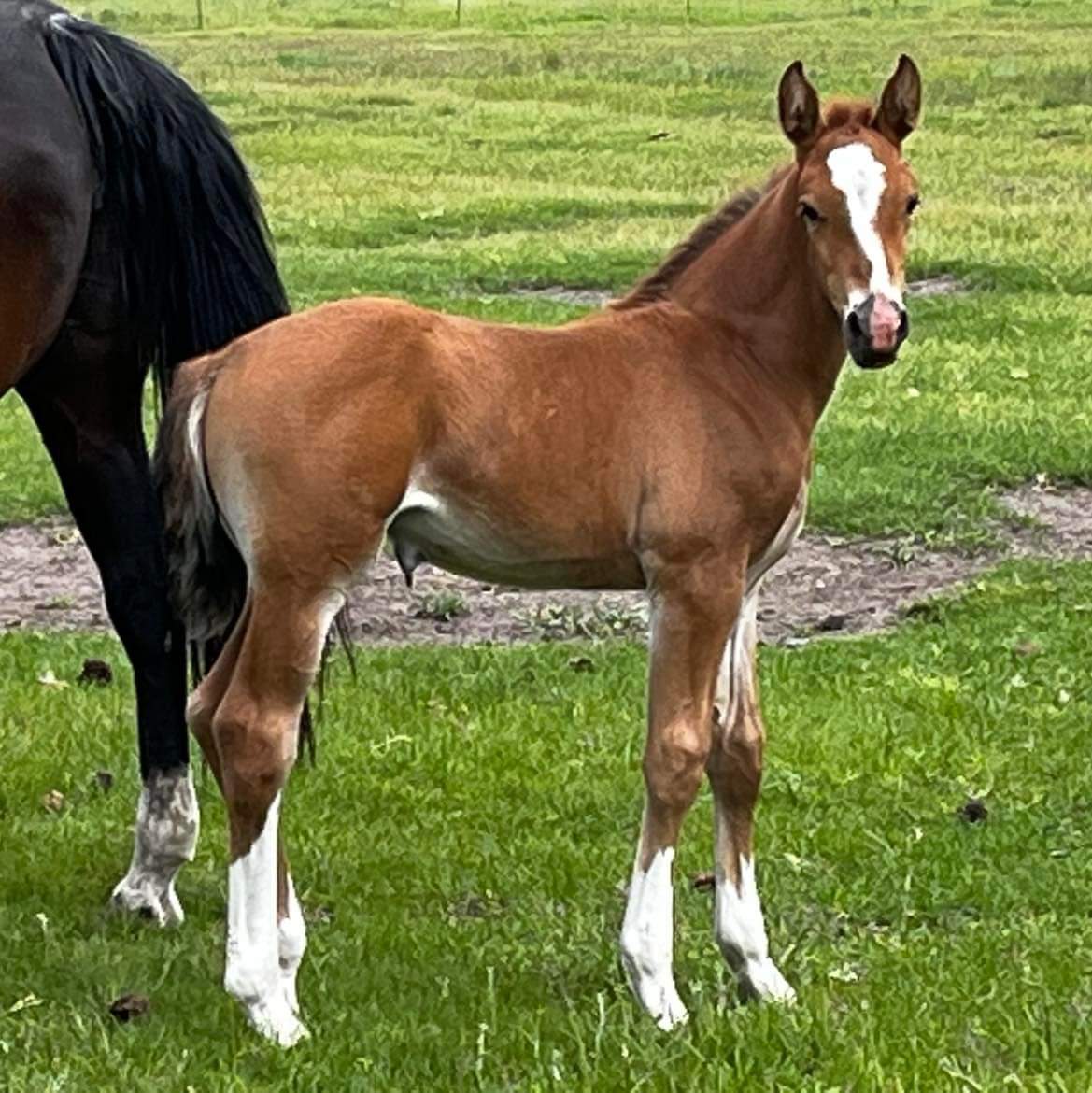 Kanoe Godby has a vision to breed Gelders horses with a purpose.  One that is a willing partner, possessing a kind and calm temperament, and able to compete in many disciplines, with talent for a professional.  Gelders horses are the foundation breed of the modern Dutch warmblood sport horse and officially considered a rare equine breed.  Kanoe said, “I feel very strongly that preserving the old, foundation blood of the Dutch Gelders horses is an important endeavor, to compensate for the everlasting aim at more modern. Gelders horses will bring traits like width, strength, bone, and substance. As well as a good, calm, amateur friendly temperament.”

Kanoe believed the Dutch stallion Recruut (photo below) would be a great match for her Gelders mare, Adessa Keur Preferent (Koss x Ahoy).  As a 3-year-old she became the first Gelders mare at a KWPN Keuring in North America to become Champion and she placed higher than other dressage horses that were shown.  Kanoe said, “She is a proven producer of top offspring that are very Gelders in type.”

Recruut was born in 1975 and is a son of the famous Marco Polo who was out of a mostly Gelders dam with some Selle Francais bloodlines.  Recruut did very well at his performance test in 1978 where he scored a 10 for free jumping, a 9.5 for jumping under saddle and a 10 for his temperament.  His offspring also performed well with especially good comments on the quality of their legs and their good type.  During his career, Recruut competed successfully at international Grand Prix jumping with his Swiss rider, Paul Weier. 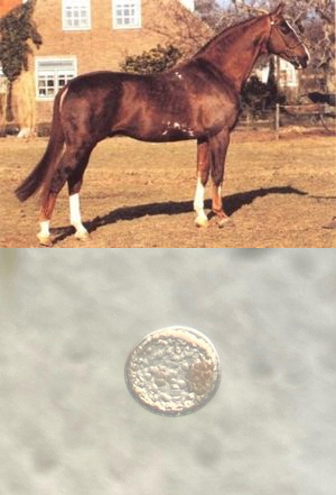 With her goal in mind, Kanoe was able to locate a dose of frozen semen from Recruut that had been processed in 1990.  She utilized the expertise of Dr. Ryan Ferris from Summit Equine (an SBS Affiliate Member) in Oregon to thaw the straw of frozen semen, breed Adessa and then perform an embryo flush on the mare.  To their excitement they retrieved two viable embryos (one pictured bottom right)!  The embryos were shipped to a different facility, transferred into two recipient mares and then the real waiting began.  Although one of the mares wasn’t able to carry her embryo to term, Kanoe was blessed with a beautiful Recruut filly (photo top left) in May 2022 from frozen semen that was processed 32 years earlier.

Kanoe said about her new Recruut filly, “I think I reached my goal with this filly: to always be able to breed back the Gelders core foundation traits. She will be a real Gelders type mare with a wide chest for big lungs, and large, strong feet. She possesses the athleticism, and a tractable nature, that the modern sport horse was built from.”

We wish Kanoe great success in her breeding program with this little filly helping her to achieve her dreams.