Gemini: The Clone of Gem Twist - Where is he Now? 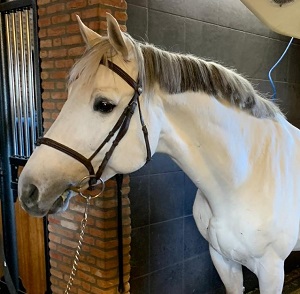 In 2013 we published an article about Frank and Mary Chapot of Chado Farms in which we included information about their then 5-year-old stallion, Gemini (photo left, 2021).  He is the clone of the famous show jumper gelding, Gem Twist, who was also owned by the Chapots.  When Gem Twist was born it would have been difficult to predict how accomplished he would become in his lifetime therefore, he was gelded as most young colts were back then.  Throughout his life, Gem Twist won Best Horse at the World Championships, was three-time AGA Horse of the year with three different riders, and won many Grand Prix throughout the world.  His most notable accomplishment was when he won both Team and Individual Silver Medals at the 1988 Olympics in Seoul, South Korea with Greg Best aboard.  With the idea they may decide to pursue the process of cloning him in the future, the Chapots made the decision to preserve tissue from Gem Twist prior to his death in 2006 at the age of 27 years old.

When that day came, the Chapots were blessed with the arrival of Gemini in 2008.  The intention of creating Gemini was not to compete the stallion but to breed him.  Frank said, “There will never be another Gem Twist and we wouldn’t tarnish that memory by trying to reproduce the past.”  Thus, they made the decision that Gemini would not compete in the show ring and have stayed true to that decision.  Instead, their goal according to Frank is to “send some good ones into the future”.

Shortly after our article was published in 2013, Gemini boarded a plane for France where he was to stay for only a few years for breeding before he would return to the United States.  However, he has remained in Europe since that time and has covered more than 300 mares with fresh, cooled and frozen semen.  He currently resides in The Netherlands where the plan is for him to stay for three years so his genetics are more easily accessible to breeders in Northern Europe.

Currently, Gemini’s oldest offspring are 8 years old and according to his manager in France, Brice Elvezi, some are showing very well.  He sired two who competed at the World Championship for Young horses in Lanaken, Belgium as well as,

When asked about his impressions of the offspring from Gemini and what his genetics are bringing to the industry, Brice said, “He has been used with big mares and some of the best genetics in Europe. It’s hard to say what he is exactly bringing as an outcross.  We will need more time.  We are seeing some really good jumpers and we are already happy with the qualities he is passing on to his offspring.” 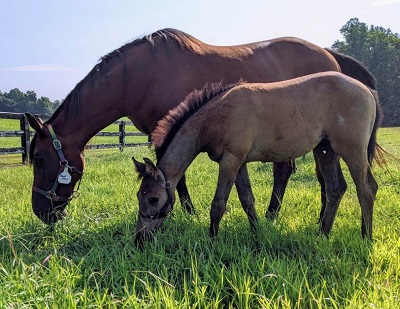 Though Gemini has spent the past many years in Europe, he has been breeding mares in the United States as well.  Before he left the country, the Chapots had his semen frozen by SBS in Chesapeake City, MD and have bred many mares the past several years.  Mary said, “Like his father, Good Twist, Gemini’s offspring all seem intelligent and athletic, able to compete at some level of sport.  Fingers crossed that maybe some will make it to the highest levels.  What fun would that be!”

We wish the Chapots, Gemini and his contacts in Europe the best of success as they work to carry on the legacy of Gem Twist.