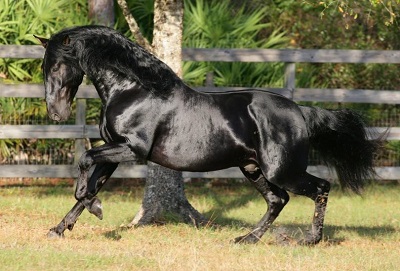 Hacienda del Sol Andalusians is located on the east coast of Florida in Vero Beach and is owned by Dr. Leonardo and Maria Mandina. They were both born in Cuba but spent several years living in Spain which is where they fell in love with the Pura Raza Española (PRE), aka the Andalusian Horse. So, in 1995 they began their breeding program with one goal in mind: To produce world class PREs with outstanding genetics, conformation, movement, temperament and dressage athleticism.

They have dedicated their breeding careers to producing the best black and bay PRE in the United States. Their efforts were recognized in 2008 when the USEF named them the Top Andalusian Breeder. This achievement motivated them in their quest to honor the Spanish legendary horses by creating news ones. Maria said, “After an intense research of Spanish bloodlines, it became evident that the Andalusians with the characteristics we were seeking had a common factor…Yeguada Militar and Escalera genealogy.”

Maria and Leonardo have been fortunate to travel throughout Spain where they have met and established friendships with well-known breeders of Andalusians. Maria said, “We were fortunate to come to terms with Maria Fernanda de la Escalera and imported a spectacular black stallion.” This stallion was Triunfador XXIV (Hebreo XIX x Triunfadora XIV). He was born in 2001, is black and stands 16.3 hands. He was a “qualified”, multiple champion in Spain earning 7 gold medals including Sevilla and Jerez. Maria said, “He is Escalera branded with Yeguada Militar bloodlines. A true genetic treasure and multi-champion in Spain.”

Hacienda del Sol has frozen semen from Triunfador XXIV (photos shown) processed by Peterson and Smith Equine Reproduction Center (PSERC), a SBS Affiliate Laboratory. It is qualified for export to the European Union as well as Australia. 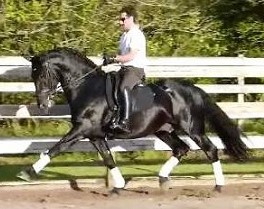 “We export Triunfador’s world class semen worldwide using SBS due to their excellent service and technology which results in satisfied clients. Jose Madera at Peterson and Smith has always handled our semen exporting requests in a professional and timely manner which is essential for our reputation as a breeding farm. The use of frozen semen enables recipients around the world to receive selected semen at their chosen time which in turn makes us a very dependable breeding farm.”

That dependability is evident in the offspring produced through Hacienda del Sol Andalusians. Maria continued to say, “Triunfador XXIV has established himself as the best black sire in the history of the breed and together with our exceptional foundation mares, we know our foals are spectacular.” His offspring have won 89 medals (mostly in Spain) which includes 46 gold medals. They have also been very successful at SICAB which is the grand final for the Spanish National Championships for PRE stallions and mares. In order to participate in SICAB a horse must have qualified at one of the qualifying contests throughout the year at a number of locations in Spain. His offspring have won 20 SICAB Medals (16 gold and 4 silver) as well as 16 SICAB Champion of Spain Awards. For the first time in 2015 SICAB awarded World Champion Titles and Triunfador XXIV’s offspring won four of them. He also has four qualified offspring. The Hacienda del Sol Andalusian horses are sure to be showstoppers regardless of the continent where they are shown.