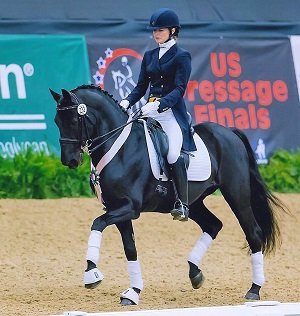 Lucy Tidd’s interest in equine reproduction began when she attended veterinary school at Cornell University. It was there that she spent several summers doing equine reproductive research for the university’s Theriogenology Department. She enjoyed collecting stallions, evaluating semen and breeding mares but upon graduation she decided to pursue a career in small animal medicine instead of working with horses full time. Once she made that decision she felt she wouldn’t have much use for all of the equine experience she had gained. However, in 2008 she purchased a 15.2 hand homozygous black Morgan dressage stallion named GKB Coal Magic (photo left and below) Ragtime Voodoo Magic x Metis Koffee) which began her endeavor as a stallion owner.

In 2003, Lucy had begun riding GKB Coal Magic when he was owned by Joanna Kelly of Blue and White Morgans. She continued to ride him for the next several years until Joanna decided to sell him when he was six years old. Lucy had not planned to become involved in the equine breeding industry but she said, “My primary purpose for him was to be a dressage horse but I felt he was such a good example of a Morgan sport horse that I decided to continue to stand him at stud.” With GKB Coal Magic as the center of her breeding program her goal is to produce athletic, trainable sport horses that are suitable for amateur riders.

GKB Coal Magic has been very successful through the FEI levels of dressage including numerous breed and open Regional, National and World titles. A few of his accomplishments include the Region 1 Great American Insurance Group AA Championships at the Prix St. Georges and Intermediate B with a top 5 placing at the US Dressage Finals in the Intermediate B Championships. Lucy said, “He was always very trainable and has a super work ethic. I can't say I've ever met a horse as intelligent as he is, or one with such a sense of humor!” His offspring are proving to be successful in the show ring as well. Two of them include Blue and White Bravo who has shown successfully through 4th level and Blue and White Freedom who is showing successfully at 3rd level, both with adult amateur owners. 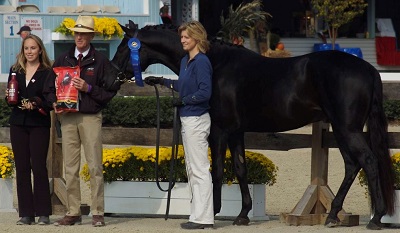 “From my first visit to SBS, I have been nothing but impressed with their procedures and professionalism. With my background in veterinary medicine and reproduction, it was very clear to me that they are second to none. I had no hesitation leaving Coal for banking of semen, and never have a moment's doubt about the quality and reliability of semen stored and handled by SBS.”

Initially, Lucy had offered cooled and frozen semen breedings to GKB Coal Magic. However, she eventually decided there were many advantages to only using frozen semen. She said, “Frozen semen has been a wonderful option for us as quality control and availability is never a concern. Also, now that I have frozen semen stored, I never have to worry about interrupting his show or training schedule.”