When Maryanna Haymon was told many years ago she could no longer ride horses she knew she had to figure out a way to remain in the horse business. She found her answer in the sport horse breeding industry. She would be able to continue her love of horses, remain a part of the sport horse world and leave her imprint in the industry. Maryanna and her husband, Wendell, own Marydell Farm in Columbus, North Carolina. The region boasts a temperate climate which allows grass to grow in the pastures 10 months of the year which is the ideal setting for breeding and raising young horses. Allowing their “horses to be horses” with lots of outdoor exercise helps them reach their optimum growth potential.

Like most breeders of sport horses in the United States Maryanna began by purchasing a mare which she intended to breed each year. The selling of the resulting foals would finance the show career of her promising gelding. For the first five years the majority of the decisions on which stallions to cross with her mare were based on whether she liked the stallion. However, throughout time she gained knowledge about pedigrees, confirmation, and which bloodlines crossed best with others. The experience she gained helped her achieve awards as the 2012 USDF Dressage Sport Horse Breeder of the Year, 2007 USEF Breeder of the Year, 2011 USEF Champion Breeder and Owner as well as the 2009, 2010, 2011 USDF Reserve Breeder of the Year.

With the goal of producing amateur friendly horses who can compete on the FEI level it was critical she found the right stallion to be a part a part of her breeding program. The resulting offspring also had to be durable, sound, sane, happy athletes. The perfect stallion for Marydell Farm was the 1999 Hanoverian, Don Principe (Donnerhall – Prince Thatch xx – Duerkheim; photo above left). He was imported to the US from Germany by Maryanna in 2005 and thus his North American show career began. As a son of the famed Donnerhall the success Don Principe had in the show ring was not unexpected. Donnerhall is considered the “Dressage Sire of the Century” and was on the winning World Equestrian Games and European Championship teams for Germany. He has also sired many other Grand Prix offspring who are also successful breeding stallions. Don Principe’s show career consists of a win at the Wellington Classic CDI Prix St. Georges, a 2nd for USDF All-Breeds Awards for both Grand Prix and the Grand Prix Freestyle in 2010, multiple wins at the Grand Prix level and several USDF All-Breed Awards. 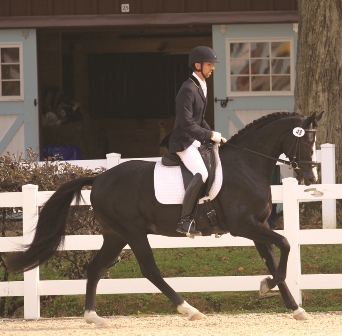 When asked about her impression of Don Principe Maryanna said, “Don Principe is a true gentleman in every meaning of the word. He prefers people over other horses and produces better than himself, foals which are lifelong companions for their owners.” This is evident in Marydell Farm’s junior stallion, Doctor Wendell MF (Don Principe – Sandro Hit – Don Gregory; Photo above right). He is the first licensed son of Don Principe. Doctor Wendell MF’s grandsire, Sandro Hit, had three of his offspring competing at the 2012 Olympic Games in London. Doctor Wendell MF himself is no stranger to winning. As a 2 year old he was USDF Horse of the Year for Two-Year Old Colts/Geldings and in 2011 was the Champion Colt/Gelding and Reserve Champion Your Horse at Dressage At Devon. During his four year old year in 2012 he was winning under saddle with scores into the 70’s at First Level Dressage.

Maryanna has been utilizing the services of Select Breeders Service for approximately 10 years. Her experience with SBS began in Germany when Don Principe’s semen was frozen by SBS North Germany with Dr. Kirsten Schwenzer. Once in the US she solicited the services of the SBS World Headquarters in Maryland to freeze his semen. When asked why she continues to use SBS for Don Principe and now Doctor Wendell MF Maryanna replied:

“I couldn’t ask for anything better! Between the quality of the product produced by SBS and the customer service they offer they are the best in the world.”

Both of the Marydell Farm stallions stand at Hilltop Farm, Inc. in Colora, Maryland and offer the use of either cooled or frozen semen. Maryanna believes in only offering and selling frozen semen from her stallions after she has performed test breedings on her mares. When asked why use frozen semen her response was:

“It’s easier than using fresh or cooled semen. It is there when you need it. I have an 18 year old mare bred with frozen who produced a live foal and have obtained many embryos through the use of embryo transfer after breeding with frozen semen.”