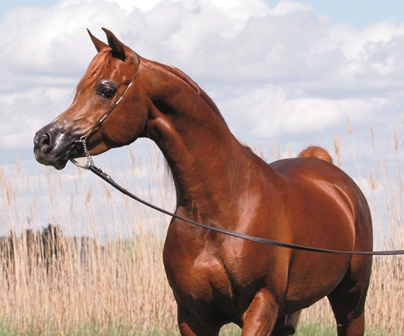 Tina Martucci and Gianni Daga founded Nejd Arabians in 2009. Though they have yet to have their own facility they are currently working out of the Arabian Show Training Center located in Dalmine, Italy which is owned by Luca Oberti. They began their breeding operation with the purchase of the Arabian mare, Aisha (SDP Taylor/Mata Hari) and a colt, Safeer (Ajman Moniscione/MO-Saifa). They then purchased a second mare Hayda Al Mali (Royal Colours/MM Eleelene) and a foal by Psyrasic and Aisha born in 2013. The latter mare is currently in foal by their 2009 colt, Safeer.

With the goal of producing quality Arabian foals which can compete internationally Tina and Gianni select a limited number of their offspring to be available for purchase. Their promising stallion, Safeer, has already proven himself internationally, winning major events under the guidance of Scott Allman. Allman, an American trainer based in France at his training center, Mas de Monpezat, lead Safeer to a Gold Championship in Itterwiller, a Silver Championship in Saint Lo Champion and a Bronze Championship in Bordeaux as well as winning his category in all three events.

At the suggestion of Allman, Martucci and Daga sent Safeer to Select Breeders Service in Italy to produce frozen semen for international export. "The semen that was produced by Safeer at SBSItalia,” says Tina Martucci, “is of excellent quality and has already produced pregnancies. This will allow us to market it worldwide. Given Safeer’s intense sport activities in 2012 and given the time he spent at SBSItalia to produce frozen semen my husband and I have decided to let him rest until the end of 2013 and bring him back to competing in the international show rings in 2014”.

"The reason why we decided to entrust SBSItalia for Safeer’s semen freezing is due to the fact that Select Breeders Services Italia is part of a well known network of laboratories recognized for the professionalism and reliability at an international level. The relationship with SBSItalia will also enable us to distribute the frozen semen of our stallion without having to worry about any logistic aspect".