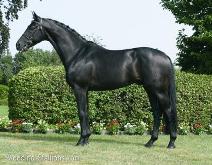 Alain Seheut of Olde Country Farm gained an early education in breeding horses working alongside his grandfather, who was a successful breeder in France. Thus it was inevitable that when Alain moved to the US several years later he would develop his own breeding program. Olde Country Farm, in Glyndon MD, breeds Warmbloods predominantly for dressage, although many go on to careers in jumping and eventing. They stand the Premium German Oldenburg Stallion, Soprano (left). Alain’s goal is to breed the type of horse that can compete at the national and international levels. He believes that longevity in performance is key; so in addition to athletic ability, he breeds for soundness in both character and conformation. 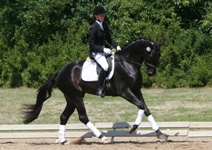 Two Soprano offspring, the mare Grevens Sa Va (right) and the gelding Sopran Morso (below), were selected to represent Denmark in the 5 year old division of the 2010 World Championships for Young Dressage Horses. At the competition held in Verden, Germany in August 2010, Grevens Sa Va qualified for the finals and finished 5th overall and was the highest scoring Danish horse. Soprano frozen semen has also been exported to England, where Angela Scott of Siangie Stud has had incredible success with her colored Soprano mare, So Pretty; whose multiple wins include the Supreme In Hand Championship at the CHAPS UK Championship Show in England August 2008.

Despite the International success of Soprano as a sire, Alain confesses that it is not about the trophies and the ribbons. “My biggest accomplishment as a breeder is to look upon my horses and be incredibly pleased with what I see; athletic horses that at the same time are social, interactive and so willing to please. The satisfaction of breeding an all around great horse is truly special”.

“Before becoming a stallion owner, our involvement with breeding was primarily as mare owners. We had our share of bad experiences and wasted a lot of time and money on poor quality semen shipments. As stallion owners it was especially important for us to provide an all around superior and professional service to our mare owners. For this reason we chose SBS to manage Soprano’s cooled and frozen semen collections and semen distribution. Frozen semen has enabled us to market Soprano internationally and Canadian mare owners can take advantage of the frozen semen we transferred to Emerald Ridge, an SBS affiliate lab in Ontario”Alain Seheut, Olde Country Farm