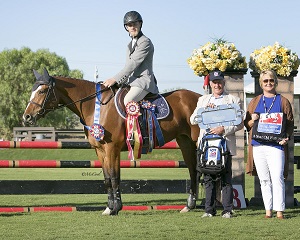 Breeding, raising, training and competing show jumpers is what business is all about at Pomponio Ranch in San Gregorio, California. Owner, Signe Ostby, has a beautiful facility nestled in a peaceful valley between San Gregorio and Pescadero. It all began about 10 years ago, when Signe’s son had a great stallion named Uno de Laubry (Galoubet A X Laudanum). At the time, she had some wonderful performance mares and decided they would be a good cross with him. She started slowly and is now standing six stallions and breeding up to six of her own mares a year. Many of these mares have achieved “Elite” status with the Belgium Warmblood Society.

Each horse is treated as an individual at Pomponio Ranch and according to Signe they are brought up in a “developmentally appropriate manner”. She explained, “The horses have programs designed for each of them. For example, a horse that is going through a big growth spurt is not going to be in work while his skeletal structure is changing. Horses are not pushed beyond what their body and mind are ready to handle.” This philosophy has allowed them success in the show ring as well. Her stallions have sired three 4-Year-Old Jumping Futurity winners which is moving them toward their goal of producing a Grand Prix Jumper of their own. At this time, most of her horses are under the age of eight which is still young for the Grand Prix ring but the future looks very promising for their progression in that direction. 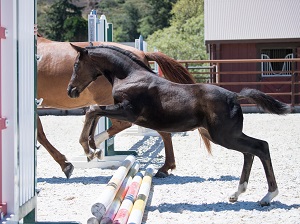 The semen from the stallions of Pomponio Ranch is frozen by Pioneer Equine Hospital (PEH), an SBS Affiliate Laboratory located in central California. They use frozen semen to breed their mares regardless of whether they will be carrying their own foals or their embryos will be flushed for transfer into recipients. However, they also utilize it for Intracytoplasmic Sperm Injection (ICSI) as well. For additional information on this process see our article Ovum Pickup in the Mare. Signe said,

“Because many of my stallions are still competing, using frozen semen makes it possible to use them for breeding despite their competitive schedule. For the stallions who have retired from breeding, we can collect them at the optimum time for great quality semen production and take the time to make sure it is of the highest quality while using the best extenders to yield the highest post-thaw motility.”

She went on to say the following about her experience with SBS, “Pioneer Equine Hospital has a great staff who really knows what is important to both stallion and mare owners.” 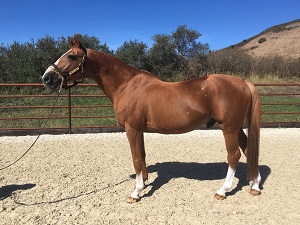 Pomponio Ranch has several veteran show jumping stallions on their roster. Uno de Laubry (photo left; Galoubet A x Fatima de Laubrey) is a Belgian Warmblood who was born in 1997 and is now enjoying his retirement at Pomponio Ranch. Before retiring, he had a wonderful career in the international jumper ring. He has many wins to his name which include the $53K Hits Grand Prix Desert V in 2012 along with wins in 2011 at the $31K Blenheim Jumper Classic Grand Prix and the $31K Showbiz Mag Welcome Stakes. His athleticism is passed on to his offspring which is evident in all of his foal crops receiving Premium in the BWP Keurings.

Upon his arrival in the United States, ASB Conquistador (photo below; Clinton x Quintana van den Bosrand), made his mark as a top Amateur and Grand Prix stallion with top placings on the West Coast, Canada and Belgium. These include winning the $35K Stake at the Del Mar Fall Festival in 2012 and the $15K Level 8 Ultra Oz Jumper class in 2015. His offspring are showing great promise as they have only just begun their show jumping careers.

Jonkheer Z (Jetset D x Ulderina Van Westleven) is an internationally accomplished Belgian Warmblood Elite stallion. In 2016, he had three victory gallops around the ring when he won the $40K Bentley Grand Prix at the Menlo Charity Show, the $40K Circle Oak Equine Grand Prix at the Giant Steps Charity Show and the $24.5K Grand Prix of Paso Robles. 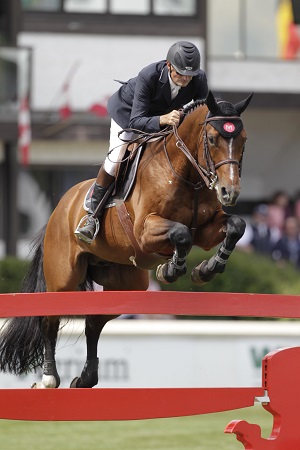 He also placed in the top 5 of several $100K Grand Prix classes. He has several wonderful offspring which are proving his ability as a sire. At the 2016 BWP Stallion approval, his son New Johnny WTF, received high remarks from the judges and another of his offspring, Quicken 1, tied for 2nd in the Foal Futurity.

Fortunately, Pomponio Ranch had the foresight to collect and freeze semen from their stallion, Cappucino, prior to his untimely passing. This allows them the ability to continue his legacy through the offspring produced by his frozen semen. They also have a couple of stallions, Menelik (Monte Bellini x Statella P) and Cyrano (Boeve’s Colmander x Ilona), who are beginning to prove themselves in the jumper arena and as sires. The offspring of these stallions will be ones to watch for in the years to come.

The goal of Pomponio Ranch is to breed and sell top quality American bred horses in order to advance the future of the international show jumping sport. It is evident they are on their way to accomplishing this goal with their stallions, mares and their athletic offspring. Their stallions have been successful in the ring at the International Level of Grand Prix and are proving to produce great jumpers as well.