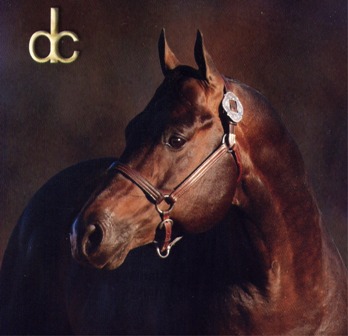 It was love at first sight when Diane purchased Radical Rodder as a yearling in 1992. She knew that not only would he do well in the show ring but that he would be a great horse that would be known and appreciated by many. She was right! During his show career, Radical Rodder won $19,787 while earning more than 91 AQHA Western Pleasure and Halter points. He also received his performance ROM as well as Superior and World Championship titles in Western Pleasure for both Junior and Senior events. It was in 1998, during his final year in the show ring, that he was crowned the AQHA World Champion in Senior Western Pleasure. He has been on the AQHA Leading Sire list since 2001 in both halter and performance. In his lifetime, he sired 1,024 foals who have amassed total earnings of $1,638,242.00 and 51,219.5 AQHA points.

Prior to his arrival at SBSW, Radical Rodder had been resident at another breeding facility for more than 15 years where he had always had a ‘girlfriend’ next to him in the barn. It was only fitting that SBSW find him such a ‘friend’ to help him settle into his new home. Tumbleweed, one of the tease mares at SBSW, moved into the barn next to him and remained his faithful friend until the end. On any given day you would find each in their own paddocks in front of the stallion barn enjoying the sunshine and green grass. 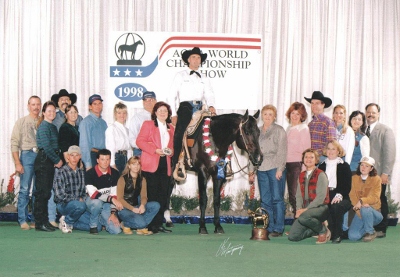 Diane has always been very active in the care and well-being of Radical Rodder which can be a testament to his long and happy life of 28 years. Upon his arrival at SBSW, she discussed how she and SBSW could work together to keep him in good physical condition by altering his collection schedule and his feeding program. SBSW welcomed experts from Purina nutrition and worked closely with them to find a feeding program that worked best for this incredible stallion.

We featured Diane and Radical Rodder in an article on the SBS website in January 2013. The article concluded with this statement, “With 960 foals already on the ground, SBSW is looking forward to assisting Diane with reaching her goal of having 1000 Radical Rodder foals grace this planet.” Diane said, “Many people told me that reaching such a lofty goal at his age was not possible. However, Paul Loomis reviewed his collection data and felt my goal was attainable. They cut him back to only collecting semen two times a week, kept a close eye on his semen quality from every collection and helped me breed 150 mares in his later years.”

Throughout his time with SBSW, everyone worked as a team to make sure that not only Radical Rodder was well cared for but that also his mare owners and his foals received the same attention to detail. Diane said,

"The relationship felt like I had a huge team. When I had trouble with a mare owner understanding or dealing with situations, the SBSW team would get on the phone right away to help settle any concerns. It was amazing! They foaled out my babies in a clean and safe environment and all shipments required payment prior to shipping so there was not a problem with unpaid bills. When key members of the team moved on to other ventures, I never felt like I was anything but cared for by Patrick Rollins and Mandi Cleveland who kept me informed of how things were going and were always courteous to my mare owners.”

Knowing when to say goodbye to Radical Rodder was a decision Diane knew she would have to make one day but that didn’t make it easier when that day eventually arrived. Diane said, “When we decided to put Radical Rodder down, I felt like I was losing a village of support. Little did I know; they would be there at the bitter end. They took Radical all the way through his golden years on to his final trip.”

Thank you, Diane, Howard and Radical Rodder for allowing SBSW to be a part of his incredible journey.