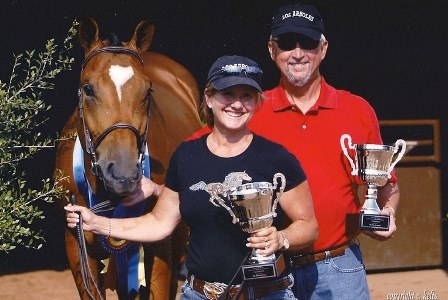 Rancho de Los Arboles is a 32 acre farm dedicated to breeding, raising and training hunters and jumpers in Oak Point, Texas. The farm is owned by Ellen and John Eakin (photo left with Thanks For The Gold). Ellen says she is chiefly responsible for the horses and John manages the land and facilities. Together they experience all the fun and excitement of breeding, training and showing their outstanding warmbloods.

The star of their program is the Hanoverian stallion, Thanks For The Gold (aka Hank).  Hank is by All The Gold, and out of the Eakins mare, Danka Shane. All The Gold achieved remarkable success during his career as a champion hunter and was inducted into the Hunter Hall of Fame in June 2012. He was also the leading sire based on earnings for seven consecutive years. His offspring won Grand Hunter Championship in every category at the 2004 International Hunter Futurity in Lexington, Ky., earning over $300,000 in prize money, which is an achievement that is difficult to accomplish and surpass. In 2008 and 2009, All The Gold was second in the USEF Hunter Sire Rankings. In 2011, this outstanding stallion passed away at the age of 29 but his qualities and winning ways live on through his outstanding offspring.

The mare, Danka Shane, was one of two mares purchased by Ellen and John on their first buying trip in Germany where they tagged along with their trainers looking for warmbloods. She was the mare they chose to breed to All The Gold thus producing their stallion Hank. She did go on to compete in the hunter ring for a while but has been put back into the broodmare band. 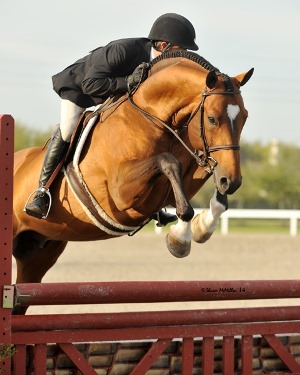 Ellen is thrilled with the foals she produces saying, “She is a fabulous broodmare stamping her foals with good looks and good movement."

“Hank is our most significant accomplishment to date. To have our first foal be of such high quality is something we are very proud of. The stallion is now 7 years old and is showing in the 3’3” performance division with Peter Pletcher. He receives high scores over fences and high ribbons under saddle in almost every class he is entered in. Hank has the same wonderful jump with bascule that his sire did and the same lovely, floating hunter movement." Ellen goes on to say, “the goal of our breeding and training program is to produce sport horses of consistently high quality. Our aim is to breed for a well-rounded athletic horse of correct confirmation, refined appearance and superior ride ability.”

Hank first won the judge’s approval when he was a yearling and named the Best Young Horse at the IHF regional futurity in OKC. In 2013, he received his certified breeding license from ISO/Oldenburg N.A. and received glowing reports from the inspector. He obtained a Star Award receiving 222.5 points on inspections and a Star Award for conformation. In 2014, he competed in Wellington, FL at the World Equestrian Festival and was Circuit Champion in the WEF 3’ Open Hunter Division.

“By using frozen semen we have been able to offer customers access to this fabulous stallion with great success and still keep him in heavy competition. SBSW has been fabulous to work with. As a first time stallion owner we were novices and the personnel at the Aubrey facility answered all our questions and have been available to us...even when we tend to ask the same questions over and over.” 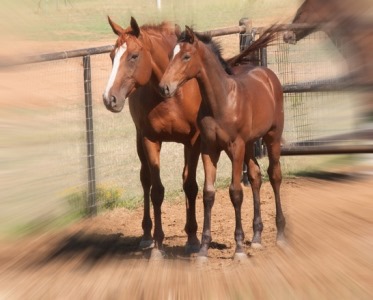 Ellen is understandably delighted with the way the breeding, training and showing operation at Rancho de Los Arboles has grown. She grew up riding hunters and jumpers in the 60s in Texas but then she took a break from the horse scene altogether. A very long break of 33 years! It was a riding lesson she took on a whim in 2003 that turned back on her desire. “We had just bought 10 acres in North Texas and I decided to take a few lessons and see if I still liked riding. At the time I never thought it would turn into owning and managing a breeding facility that would become the centerpiece of our life and I never thought I’d be riding and jumping horses again in my 40s either." It just goes to show you the world of horses is enchanting and has a way of being irresistible, capturing us again and again, no matter what our age.