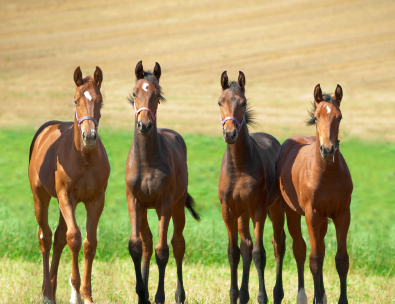 In recent issues of the SBS monthly newsletter we presented a couple of blog articles about reproductive efficiency, titled Measuring Reproductive Efficiency and A Review of Reports of Reproductive Efficiency. At SBS we ship out 1000s of frozen semen shipments a year, however, it is very difficult for us to get the pregnancy data back from the mare owners we send semen to. In the future we hope to simplify this process by enabling our clients to respond to an automatically generated email through our website. This would be great information to have available for review by mare owners considering frozen semen. We do track fertility data for the mares and stallions we manage at our SBS affiliate locations and we try to combine this data as a group for analysis. We summarize this information for you here.

This data represents mares of all ages and breeds managed with shipped-in cooled or frozen semen by several affiliate locations in North America and Europe as well as mares managed at home farms or other clinics that were inseminated with semen collected and shipped by SBS. The data for frozen semen included both SBS and non-SBS frozen semen and mares were managed utilizing single or multiple doses per breeding cycle.

The higher seasonal pregnancy rate for frozen semen in the 2001 study may be related to the fact that this data represented semen frozen and distributed by Select Breeders Services only, whereas the data presented above includes mares bred with both SBS and non-SBS frozen semen.