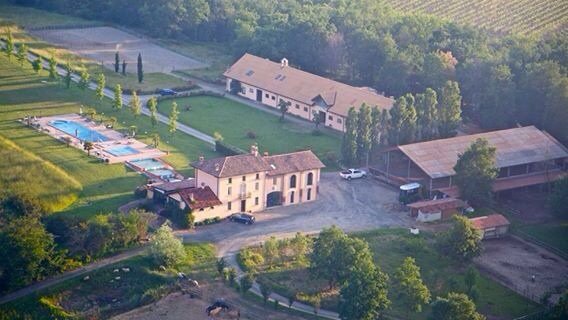 Halfway between Parma and Piacenza, Italy there is a small town named Alseno. Within this region of Emilia Romagna sits an Arabian breeding farm, Shazin Stud, owned by Mr. Khaled Al Enzan and his son Rashid. During a trip to Italy in 2013 Mr. Al Enzan was looking for a place where he could buy Arabian horses. He randomly stumbled upon a beautiful property that housed a vacation retreat, a landing strip and stables with Spanish and Arabian horses. On that day there were 400 ultralight aircraft on the property for a special event. Struck by the beauty of the structure (photo left) and driven by his passion for horses he decided to buy the property and turn it into an elite Arabian horse breeding farm for halter show horses. 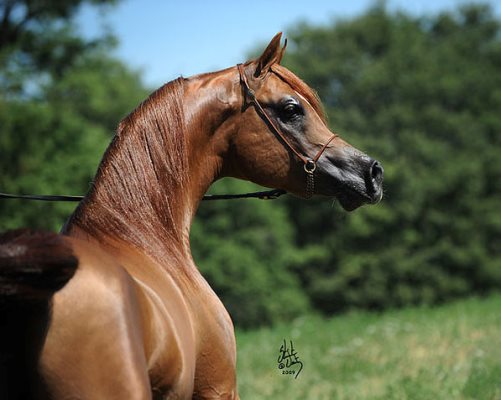 Once Mr. Al Enzan purchased his new farm he began buying many horses; pregnant mares, foals and stallions. These horses were from prominent breeders throughout Italy and Germany and were mostly of Egyptian bloodlines. Thus began the foundations of his new breeding farm which is now home to more than 50 horses, three barns, a covered arena, an open arena, a treadmill, and large paddocks.

Three stallions call Shazin Stud home; TF Colours (photo below left; Royal Colours x Nuk Serondella), TF Justin (photo below right; WH Justice x TF Royal Lady) and Psequel (photo right; Padron Psyche x Ynazia HCF). A number of mares from the best bloodlines also reside at the farm. Though they breed some of their mares to their own stallions they decided to also draw from the genetics of other farms in order to obtain winning crossings. A few of those stallions are Cavalli, EKS Alihandro, Kahil Al Shaqaab, Faroud Al Shaqab and QR Marc, just to name a few.

After purchasing the facility Mr. Al Enzan decided to continue his relationship with the staff of SBS Italia which had already been established with the previous owners of the property. SBS Italia assists Shazin Stud with the management of their mares for insemination with fresh, cooled and frozen semen, their embryo transfer program and stallion management.

In 2014 Shazin Stud decided to rely on SBS Italia’s long standing experience of processing frozen semen by freezing semen from their stallion, Psequel, as he is part of a group of horses to be sent to Saudi Arabia. This will allow Psequel to continue to sire foals in Italy while residing in a foreign country.

Certainly the future holds great promise for Shazin Stud’s breeding program of which SBS Italia is pleased to be a part of. SBS Italia wishes good luck to all the Shazin Stud staff for a successful 2015 breeding season.