In 2003, Rachel Spencer was looking to purchase a “fancy, young hunter prospect”. She was not a horse breeder and was not looking to purchase a stallion. However, in the process of her search she came across a young stallion which trainer Tommy Serio had in for training. After watching him go for the first time she asked if they would sell him. After some negotiations she purchased the 1997 Bay Dutch warmblood stallion, Popeye K (photo left; Voltaire x Eloretta). Now she was in the breeding industry. Rachel said, “We had never intended to purchase a stallion. So I have had a very steep learning curve!”

Rachel has always intended for Popeye K to be a show horse first and a breeding stallion second. As a result of keeping him in the show ring he has been able to accumulate many awards. In 2004 he was named the USEF Green Conformation Hunter of the Year. In 2005 and 2006 he was awarded the USEF Regular Conformation Hunter Reserve Horse of the Year. 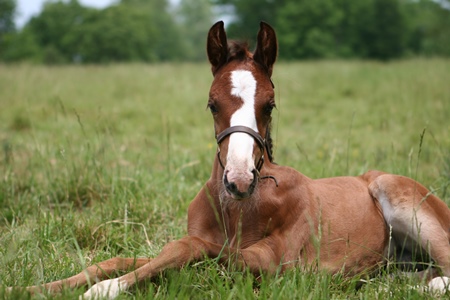 He was also named the Winter Equestrian Festival Circuit Champion in the Regular Conformation Hunter Division for three years in a row (2005, 2006, 2007). He had the honor of being named Chronicle of the Horse’s 2005 Show Hunter of the Year. However, his most recent accomplishment has been to be named the USEF’s Hunter Breeding Sire of the Year for 2008 and 2009. The goal of their breeding program has changed often but the end result has always been to produce an athlete which is evident in his many accomplished sons and daughters.

Choosing to keep Popeye K (photo below) as a show horse could have played havoc on his ability to succeed as a breeding stallion if Rachel had not had the foresight to utilize frozen semen. One of the major benefits of frozen semen to owners of performance stallions is the ability to have their horses participate in the breeding season and still maintain an active show schedule. “With the frozen semen we have in storage we have been able to accomplish both the goals of his being a show horse and a breeding stallion,” said Rachel. 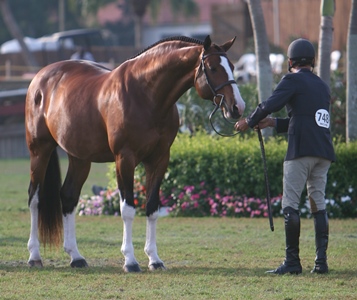 The frozen semen has allowed them to accommodate their breeders without derailing his training program or his show schedule. When asked why she chose SBS she said,

“GREAT SERVICE! The care Popeye received has always been top notch and he always comes home in perfect shape to go back into training!”

Frozen semen can be shipped regardless of where Popeye K is and he doesn’t have to be collected for cooled semen while showing in different parts of the country. Rachel went on to say, “We have always had great results with frozen semen, even doing embryo transfers. You can ship early and have it available at the moment you need it. It provides flexibility to our mare owners and doesn’t depend on our stallion’s availability on a certain date. It’s a great arrangement for our breeders and for Spencer Ranch.”