Sport Ponies on the Rise 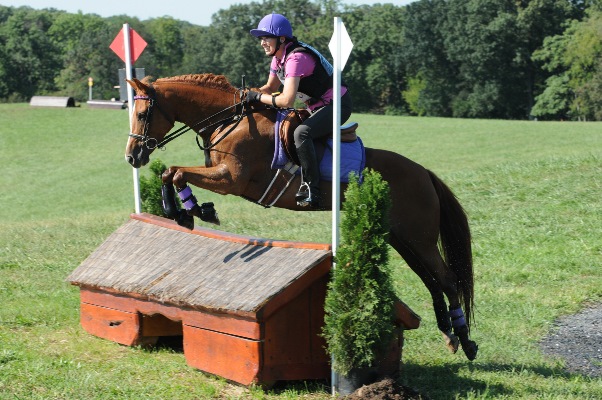 When thinking of a “Sport Horse” one might think of large Warmblood horses flying over oxers, dancing across an arena or jumping into a water jump. The mere size of some of these horses (some over 17 hands high) can be daunting to smaller adults and younger riders. Smaller than their larger counterparts, the Sport Pony is bred to excel in all of the same events yet they are more suited for younger and smaller competitive riders. Typical sport pony breeds include the German Riding Pony, Connemara Pony, New Forest Pony, Welsh Pony and Fell Pony. Standing between 13.2 and 14.2 hands tall Sport Ponies are known for their tremendous ability, big movement, great temperament, and high level of ride ability. Although ponies were once considered mounts for children, many adults are experiencing the benefits of riding a Sport Pony and they are holding their own against the big boys in open competition. Below we further explore reasons to freeze pony semen and highlight a few Sport Pony breeds along with a few of our clients who are experiencing great success with their pony stallions.

There are good reasons to freeze semen from any stallion but there are a few additional reasons why freezing pony stallion semen is a good choice. 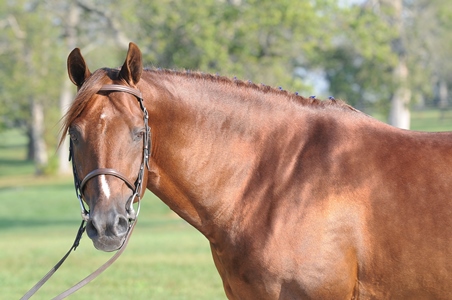 German Riding Ponies are relatively new to the United States but their breeding began in 1965 by crossing English pony breeds with Arabians and Thoroughbreds and by the mid 1970’s a distinct German Riding Pony was developed. These ponies look like mini Warmbloods and are bred to be competitive in sport horse competitions but at the same time be quiet and well-tempered for their child riders. Danyloo (photo left; Diplomat x Baroness), a 17 year old German Riding Pony, was imported into the United States by Jennifer Matheson in 2003. He is still competing to this day and has won many awards throughout his show career in the US, Canada, England, Germany, Austria and Slovenia. He was named 2010 USEF Horse of the Year-Combined Driving Pair Pony Champion, 2011 USEF Horse of the Year-Combined Driving Pair Pony 3rd, and the 2012 USEF Horse of the Year-Combined Driving Pair Pony 3rd. More recently he traveled to Pau, France as a member of the US Equestrian Team for the 2013 World Combined Pony Driving Championships. 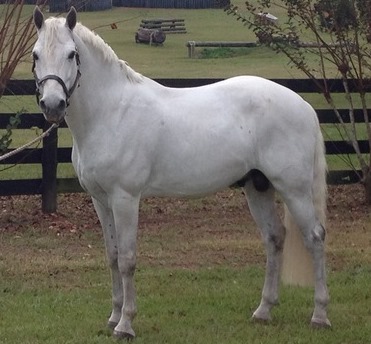 The Connemara pony originates from the Connemara region of western Ireland. It is believed the Connemara pony may be descended from Scandinavian ponies brought to Ireland by the Vikings and may also have been influenced by Andalusian horses set free when galleons from the Spanish Armada ran aground in 1588. Their official stud book was established in 1926. Due to the harsh environment on the rugged mountain coast of Ireland Connemara ponies are sure footed, hardy and agile. Today, you can find Connemara ponies throughout the world excelling in all sport horse disciplines but they are particularly known to be great jumpers.

Hidden Creek Horses, located in Alpharetta, Georgia and owned by Donna Miller and Roger Brown specializes in starting and bringing along young sport horse prospects. In 2006, they imported the grey Connemara pony stallion, Ardceltic Art (photo above right; Monaghanstown Fionn x Moydow Lady). Unfortunately, Ardceltic Art passed away in 2013 when he was only ten years old. Prior to his passing he competed successfully in eventing through the CCI two-star level and won his division at one of his last events in August of that year. He was also very successful in dressage and was competing at the 4th level with an amateur rider.

Kynynmont Cooper O’Grady aka Cooper (Gun Smoke x Kynynmont Moira), a 2008 dark buckskin Connemara pony stallion owned by Pam Liddell, is another stallion who has proven to be a winner in the sport of dressage. He was the 2012 USDF/GAIG Region I First Level Open Champion, and 4th (out of 40) in the 2012 USDF Bengt Ljunquist Memorial First Level Open Senior Rider B Finals. In 2011, he was Reserve Champion in the USDF Bengt Ljungquist Memorial Training Level Senior Rider B Finals. In both 2012 and 2013, he was Reserve Champion, USEF Purebred Connemara Dressage Horse of the Year (behind a Kynynmont brother each time), and in 2013 he was named the ACPS Connemara of the Year. 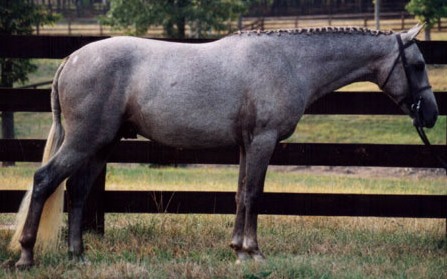 He is currently in training with JJ Tate and is competing at third level. His first foals were born in 2013 and their eventual debut in the show ring is highly anticipated.

Seaborne’s Navigator aka Navigator (photo left; Grange Finn Sparrow x Hideaway-Greystone’s Covergirl) is the Connemara pony bred by Denise Hill. Prior to her gelding and selling him, Denise had the foresight to have his semen frozen by SBS. As a result of him being gelded he can be shown by children in the hunter ring. He was very successful in the Large Pony Hunters and won the USDF Clifton Trophy for high scoring Connemara pony hunter several times.

Native to the New Forest in the south of England is the New Forest Pony. Ponies have grazed in the area of the New Forest for many thousands of years, predating the last Ice Age. In the past several years the number of New Forest Pony foals born in the world has declined. As a result, in 2014 the Rare Breeds Survival Trust listed the New Forest Pony in its “minority breed” category because there are less than 3000 breeding females left in the New Forest. Their endurance and agility make them excellent competitors in jumping, dressage and eventing. 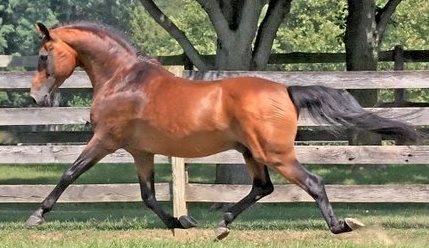 Forrest Flame was born in 1999. He was presented for inspection to the ISR/Oldenburg Registry where he received his Provincial License and the American Warmblood Registry where he was also approved and received First Premium status in 2001. The following year he completed his 30-day performance test for the ISR/Oldenburg registry and received his Lifetime Breeding License. Forrest Flame competed through 4th Level Dressage and has sired many inspection site champions and successful competition ponies. His daughter, Forrest Nymph, is currently competing at Intermediate level eventing with professional rider Sinead Halpin. Forrest Flame has since been gelded, sold and is now competing with a young rider.

Laurel Highland Farm and Equine Services LLC breed and compete Fell Ponies. Fell Ponies originate from the Lake District in northern England and were originally used for light agriculture and as a packhorse for the transportation of farm goods. Being good, fast walkers they would often travel up to 240 miles a week. Today, Fell Ponies are versatile in many disciplines such as endurance races, dressage, combined and carriage driving, and the hunter/jumper ring. 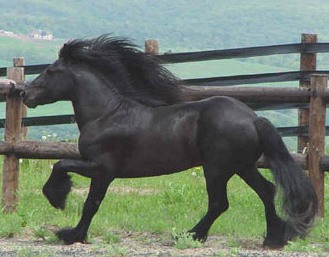 They are most commonly black in color though they can also be bay, grey or brown. They have a long mane and tail and distinctive “feathered” fetlocks. Although there are some similarities to the Friesian horse there are many differences between them other than their size. For example, Fell Ponies have much more stamina than their larger look alike as well as being hardy and sure-footed due to the tough conditions and climate of the Lakeland fells.

Laurel Highland Farm owns several Fell Pony stallions, including, Waverhead Model IV (photo left; Lownthwaite Gary x Waverhead Pearl) who has been multi-champion in harness, including winning the Concours d'Elegance more than once. Determined by the Rare Breeds Survival Trust to be an “at risk” breed, genetics for the Fell Pony are in demand throughout the world and SBS exports frozen semen from Laurel Highland Farm stallions internationally.

The Westphalian horse is a warmblood breed originating from the Westphalia region of Germany and is one of the larger breeds in that country. The smaller version of the Westphalian is the Westfalen Pony and can be of any solid color. Their warm and willing personalities and intelligence make them easy to train. 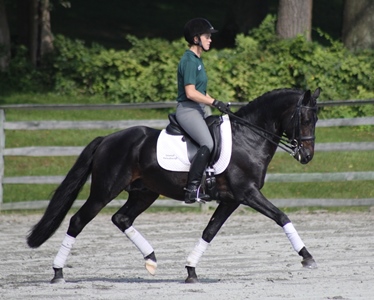 One such Westfalen Pony stallion is Popeye (photo right; FS Pour l’Amour x SPS Nice Touch) who stands at Hilltop Farm in Colora, MD and is owned by Summit Sport Horses, LTD. He is approved for breeding through the International Sport Horse Registry/Oldenburg North America and Westfalen registries. They utilize both cooled and frozen semen from him which allows Popeye to continue his extensive show career. A few of his most prestigious awards include the 2011 Reserve Champion BLM Finals (at Fourth Level), Westfalen 1st at Third Level in 2010for the USDF All-Breeds Awards (Westfalen) and in 2007 he was Reserve Champion stallion for the USDF East Coast Finals.

Representing a variety of disciplines, each of these sport ponies have proven themselves to be successful in the show ring. Select Breeders Service and its affiliate laboratories have assisted these owners by freezing, storing and distributing frozen semen from each of the above stallions.