Four years ago Barbara Roux, owner of St. Bride’s Farm in Upperville, Virginia, purchased a beautiful, athletic, Holsteiner stallion named Coronett 2 (Corrado I/Hanka VI/Cassini I). All three stallions in his stallion line have produced top international and Olympic jumping horses. Born in Germany in 1999 Coronett 2 competed successfully throughout his show jumping career and at the age of nine was part of the Irish Nation’s Cup team in Wellington, Florida.

It was a tragic day for Barb when she had to make the difficult decision to put down Coronett 2 at the young age of thirteen. During his four years as a member of the St. Bride’s Farm family he spent two years under the direction of Kevin Babington before finishing his career with Jill Priato in the saddle.

“Coronett 2 was the kind of horse that could jump the moon yet would safely pack a child around, he was just the perfect intersection of athleticism, personality and type and I still miss him.”

Lush rolling hills and happy horses are words which could be used to describe St. Bride’s Farm. Their philosophy of “allowing horses to be horses” includes daily turnouts and ample trail rides as well as generous post show and seasonal breaks to supplement their training program.The horse barn at St. Brides Farm was the 2011 recipient of the Building of the Year award from the National Frame Builders Association. The barn utilized only sustainable wood species, energy efficient technology and as many recycled elements as possible. It is not only aesthetically pleasing and functional, but environmentally friendly as well. St. Brides Farm is truly a slice of horse-lovers heaven. 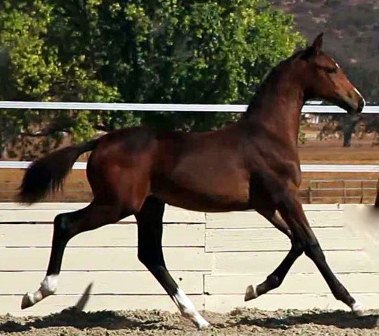 The dream of having Coronett 2 become an influential player as a breeding stallion was almost not a reality for St. Bride’s Farm. His first breeding season in the US began with a rocky start. Barb turned to Pioneer Equine Hospital (PEH), a SBS Affiliate lab in Oakdale, CA, for assistance. The staff at PEH helped Barb with the issues she was concerned with, educated her on protocols and the quality control standards strictly adhered to by SBS. After her experience on the West Coast with PEH Barb was confident Coronett 2 would be a successful breeding stallion and sent him to SBS in Maryland for collections and semen freezing. When asked about her experience with the SBS Affiliate network Barb said,

“I was pleased with the entire process including the quality analysis and motility numbers which followed each collection. They qualified his straws for both domestic and European export. I have been continually impressed with the staff, their accessibility, professionalism as well as their record keeping. SBS uses a very strict protocol to ensure the semen they collect is contaminant free, is of the highest quality, is stored properly and shipped promptly.” 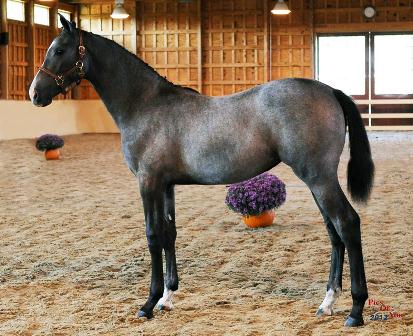 Barb is on the way to her goal of producing a successful line of American Holsteiner show jumpers. The evidence can be found with their first foals receiving Premium Foal Status from the AHHA in 2012 and are Esprit de Vitoire (Coronett 2/Variete/Caitano; photo right) and Etoile Montante (Coronett 2 /Selina/Mermus R; photo above left). It was a trip to Germany which led her to bring home Variete, a State Premium Mare and the dam of Esprit de Vitoire. During her last stop in Germany she realized Coronett 2’s breeder lived next door. Coronett 2 was one of only three horses he had pictures of in his home and after looking at several horses he offered Variete for sale.

“If I had not been introduced to SBS I may not have been able to have these foals.”

To learn more about Coronett 2 and St. Brides Farm, please visit their website.