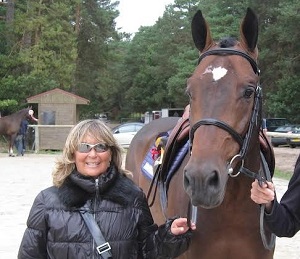 In 1991, the Ca’ San Giorgio Breeding Farm in Italy was founded by the Chittolini-Dubowy family. It began when they started breeding their own show jumping mares after they retired from the show ring. Their founding broodmare band began with selecting the best European bloodlines from the best performing German and French maternal lines. As Stefania Chittolini (photo left with Ladro di Cuori CSG) said, “Only quality produces quality.” In 2007, they moved their entire operation to the Netherlands. However, after four short years they decided to return the breeding operation to Italy but continue to have the foals grow up in Holland. Currently, their horses are performing all over the world in countries such as the United States, France, Great Britain, The Netherlands, Germany, Russia, Italy and more.

At Ca’ San Giorgio Breeding Farm they focus on breeding modern sport horses for show jumping with blood, energy, attitude and power. Stefania said, “Our standard is at a very high level having horses performing in G.P. CSIO 5*. So, we work to maintain and improve our standard. We are very careful in our cross-breeding program. We always try to choose the best sires while at the same time trying to choose the most suitable match for our broodmares.” 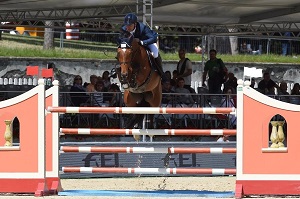 Dr. Sandro Barbacini and Dr. Gianmaria Postinger of SBS Italia has assisted Ca’ San Giorgio Breeding Farm with many aspects of their breeding program including mare insemination, foaling, foal care, and embryo transfer. Stefania mentioned, “We have our own recipient mares because we utilize embryo transfer every year for our mares that are still showing or are too old to carry their own foal. Last year, we flushed an embryo from our mare Fatti Bella by the stallion Querlybeth Hero and are expecting the foal’s arrival in 2017.”

More recently, Stefania brought her stallion Ladro di Cuori CSG (Photo below; Kannan x Fatti Bella) to SBS Italia for semen freezing. He is approved for breeding in France, Holland and Italy. Under the direction of the International French Champion, Eric Navet, Ladro di Cuori CSG competed in the French Championship where he placed first as a 7-year-old. Unfortunately, he sustained injuries during an accident that has ended his sport career. Mrs. Chittolini said of working with SBS,

“Working with an internationally renowned organization such as SBS, helps facilitate communication and dealings with stallion owners because of their reputation and professionalism.” 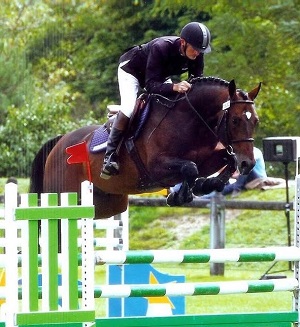 For many years SBS has recommended stallion owners sell the frozen semen from their stallions with a live foal guarantee and a specified number of doses per breeding contract. Approximately, 90% of the foals from Ca’ San Giorgio Breeding Farm are a result of breeding with frozen semen. This allows them the opportunity to obtain the best genetics throughout the world. Mrs. Chittolini pointed out, “However, in recent years, many stallion owners, agents and brokers have moved away from this practice and are selling the semen by the straw instead of by the dose. Which means all the risks are left in the hands of the mare owners.”

SBS Italia will be right alongside Ca’ San Giorgio Breeding Farm as they continue to improve the sport horse breeding industry through their careful selection of stallions for their broodmare herd.