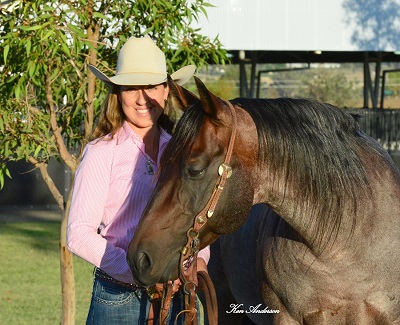 Teresa Russo of Australia started her career in the horse breeding business about 14 years ago. It all began in 2003 when she bred her first mare JTO Juanita (Kings Legend x Lena San) to the stallion Seligman Spin (Docs Spinifex x Lady In Red). From that point forward she continued to breed her mares to have one or two foals a year mainly for her own use to keep her busy and have young ones to work with. It wasn’t until many years later that she ventured into the realm of owning her own stallion.

The stallion Teresa set her eyes on was the 2003 Quarter Horse cutting stallion One Roan Peptos (Peptos Stylish Oak x One More Spin). Teresa first became acquainted with him as a 2-year-old colt at Ian Francis Training Stables, and was lucky enough to care for and lope him during his futurity year. That year he was Reserve Champion at the NCHA Futurity in Tamworth and Non-Pro Futurity Champion in Toowoomba. Shortly thereafter, she traveled to the United States for two and a half years to gain a greater knowledge of the cutting horse industry but returned to Australia and One Roan Peptos when her time abroad came to an end. Early in 2012 she was finally able to call him her own and it was then that her dedication to the breeding industry grew.

The main goal of Teresa’s breeding program is to produce quality cow horses (cutters, campdrafters and challenge horses) and to showcase One Roan Peptos as a sire in both the Australian and US cow horse industries. Along with many other major cutting events, Teresa and One Roan Peptos have won the Non Pro Gold Cup in 2012 and 2016. He is also the Highest Money Earning stallion in the history of the National Cutting Horse Association of Australia with Lifetime Earnings of more than $157K. Not only is he the #2 All Time Leading Money earner in Australia but he has also been named the NCHA Open Horse of the Year three times and the NCHA Stallion of the Year three times as well. 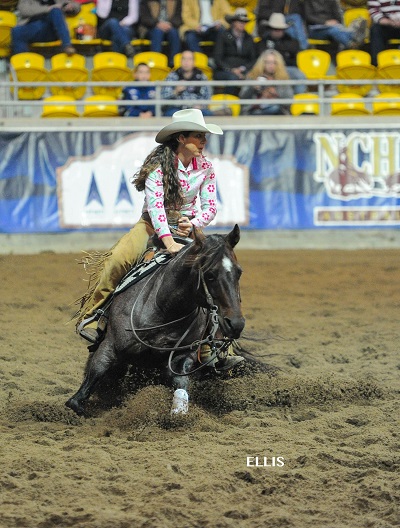 When asked about the offspring of One Roan Peptos Teresa said, “Progeny from One Roan Peptos seem to be suited to a number of different cow horse disciplines, they are athletic, cowy, smart, good-looking and built right.” As of today, he has offspring competing in several events such as cutting, campdrafting, challenges, barrel racing, roping and western dressage. A few of his notable offspring in the cutting pen include: One Deluxe Pepto (out of Sonita Acre) who is a Victorian Non Pro Futurity Champion that has earned more than $40K, KB One Sweet Peptos (out of Docs Sweet Hickory) who was Reserve Champion in the Darling Downs Non Pro Futurity, One Eighty (out of Leemark Cinders) who was an NCHA Open Futurity Finalist and EBS Last Touch (out of NBarDot Touch of Class) who was named a Breeders Incentive Open Derby Reserve Champion and a NCHA Open Classic Finalist. Each of these offspring have also been finalists in multiple aged events.

One Roan Peptos also has notable offspring competing in campdrafting. In 2016, Destined For Moore (out of Annies Acre) was Champion of the Powlett River Maiden draft, GCA Championships Novice Draft and the Carrathool Novice Draft. Another is One Roan Spina (out of Spino Leo) who was the Paradise Futurity Draft runner up after a 3-way runoff and the winner of the Landmark Classic Draft Round 1 Cutout. EBS Touchmiasomemore (EBS Mia CD) and her youth rider won the Dirranbandi LADIES cutout and have been in the finals in a number of juvenile and novice drafts.

Teresa entrusts all of One Roan Peptos collections to Tamworth Equine Veterinary Centre (TEVC), an SBS Affiliate Laboratory, located in New South Wales, Australia. One Roan Peptos has spent each and every breeding season of his life here under the guidance of Dr. Stuart Keller.

“Stuart and his staff have been doing a wonderful job of looking after my stallion for many years. I feel relieved each breeding season when I leave him there, knowing that he is in the best of hands.” Teresa also said, “TEVC offers a great service in regard to breeding, collections, freezing and storing semen as well as providing support, advice and guidance on such matters.” 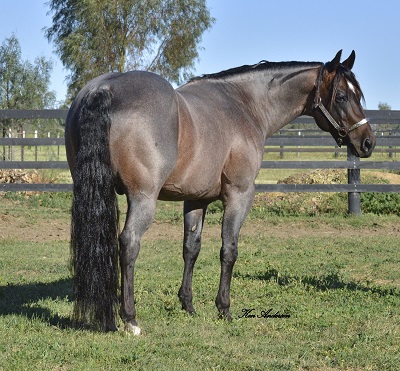 One Roan Peptos not only stands at their facility for cooled semen collections during the breeding season but TEVC also processes his frozen semen for both domestic use within Australia and export to the United States and New Zealand. His frozen semen is also stored in case anything should happen to the stallion. Teresa said, “Being able to ship semen to the US has been a great addition to our breeding program. It is much easier and less expensive than trying to shuttle the stallion overseas to fulfill breeding commitments on both sides of the world. There is already progeny on the ground in the US and they are currently starting the oldest ones under saddle – soon we should be seeing One Roan Peptos progeny competing in US competitions, which is incredibly exciting.” She went on to say, “Some breeders within Australia prefer to use chilled semen but there are some that request frozen semen either due to their remote location or they wish to be prepared in case their mare needs to be inseminated on a weekend or public holiday.”