The Role of the Gut Microbiome in Post-Partum Colic 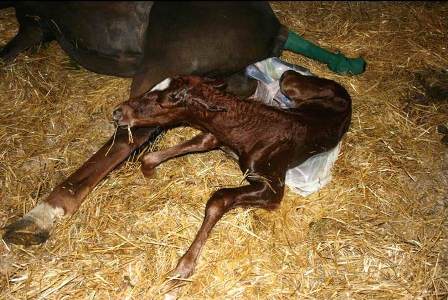 Post-partum colic is a major issue and scientists are still not completely sure what occurs in a broodmare’s gastrointestinal (GI) tract that makes them at a greater risk for colic after giving birth. There have been recent studies characterizing the mare’s gut microbiome during and after pregnancy as well as immediately before an episode of colic in order to get a better idea of any changes occurring in their GI tract. Understanding changes in their microbiome may give us clues on how to better manage broodmares after parturition.

There are many disruptions that occur in a mare’s body after they give birth. Changes in diet, hormones and metabolism are thought to contribute to their higher risk for colic during this time. Many studies have shown how abrupt changes in a horse’s diet can disrupt their gut microbiome and can cause GI disease [1]. It is also hypothesized that just the physical spatial changes in the mare’s abdomen can contribute to increased risk for post-partum colic. The most common forms of colic seen in broodmares are large colon displacements and torsions. They are thought to occur after birth because there is significantly more room in the mare’s abdomen, which allows the large colon to twist more easily [2].

In order to understand how to prevent post-partum colic in the mare, it’s important to know what changes, if any, are happening in the gut microbiome during this time. In a study published in 2014, researchers reported results from a survey of gut microbiomes from mares experiencing post-partum colic. Fecal samples were collected from 13 mares that experienced post-partum colic and 13 mares that didn’t develop colic both before and after foaling to analyze changes occurring between the time points. Samples from 5 non-pregnant mares were also analyzed as controls [3]. Large colon volvulus was the most common type of colic in this study and was seen in 31% of the mares in the post-partum colic group. They also found significant differences in the gut microbiomes between late pregnancy mares and non-pregnant controls but no differences between samples from mares before and after parturition.

Their major findings, however, were the changes observed before a colic episode. Right before developing colic, mares had an increased abundance of a group of bacteria called Proteobacteria when compared to mares that didn’t experience colic. They also saw that the Firmicutes bacterial group made up either greater than or equal to 50% of each of the microbiomes of all mares in the colic group. These two types of bacteria may be good indicators to predict the onset of colic. However, more research needs to be conducted in this area to accurately define any microbiome changes that occur before post-partum colic.

Changing the way in which we manage mares, specifically in regards to their diet, may also help to reduce their risk of colic after parturition. Usually, after giving birth, the mare’s diet is changed in order to compensate for the loss of calories due to nursing their foal. This abrupt change in diet could cause stress to the mare’s GI tract and could be the cause of diseases like colic. Abrupt diet changes have been shown to cause significant changes in the gut microbiome [1]. The microbiome is affected because when microbes in the gut are given a different diet to digest, there are changes in the byproducts that they produce. These byproducts cause a change in short chain fatty acid production as well as the overall pH in the GI tract.

Post-partum colic is a major issue in broodmares. Recent findings about the gut microbiomes of mares before they develop colic may be the start of understanding the changes that occur during this time. This could help us to possibly prevent colic by closely regulating a mare’s diet after they have foaled in order to keep their microbiome as stable as possible during this sensitive time. This is especially important in mares that are more prone to colic.

You may also be interested in the following article: