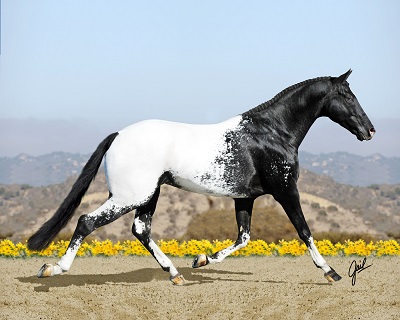 Blanny Hagenah of Avalon Appaloosas has been breeding all-around Appaloosas for nearly 30 years. Horses have always been in her life but while she was living in the Pacific Northwest she became interested in the “Nez Perce” horses. The Nez Perce horse is a spotted horse breed of the Nez Perce tribe of Idaho whose conformation is longer and leaner than the typical Quarter Horse or other stock horses. They were a popular, colorful breed which was well known for their kind disposition, soundness and versatility. Over the years her breeding program has transformed into producing good-looking colored Appaloosas and colored Sporthorses with correct conformation which can succeed in a variety of disciplines.

It all began when Blanny purchased two mares, one was a very colorful foundation-bred performance mare and the other a fancy few spot leopard Appaloosa halter mare that was a state and regional champion several times. With their success in the show ring Blanny decided to begin breeding the mares to National and World Champion Appaloosa stallions. She also began adding broodmares that had correct sporthorse confirmation and athletic ability. The resulting offspring not only helped build her show string but also her breeding stock.

Working toward her goal of producing good-looking Appaloosas and colored Sporthorses Blanny said, “It is extremely important that they have the minds and dispositions to be excellent riding partners. In 2005, I welcomed a highly colored colt, Honkytonk Wrangler, that embodied all of the attributes I was looking for in a breeding stallion: stunning color, bloodlines, conformation, 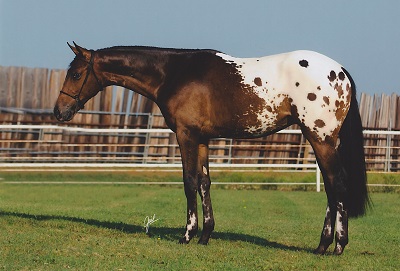 athleticism, honest work ethic, and the ability to sire correct and colored foals. He puts size and color on his foals and they tend to be kind, brave and easy to work with.”  Two of his colorful offspring are pictured here, Fearless (photo right; a 2009 ApHC gelding) and JR Wrangler (photo below; a 2013 ApHC gelding).

Honkytonk Wrangler (photo top left; Sunbeach Honkytonk x Sirtenly Sirprized) is a registered ApHC 2005 black and white snowcap stallion. His sire is a multiple winner in English performance classes and his dam is an all-around performance and eventing mare. Honkytonk Wrangler was the 2007 Reserve National Champion Hunter in Hand 2&3 year old colts and he is a 100% color producer whether he is bred to solid or colored mares. His foals have won titles at the Appaloosa National and World shows, and they are open performance winners as well. Blanny said, “We offer Honkytonk Wrangler's colorful offspring and mares bred to him for sale. With their size and willing dispositions his foals have excelled in hunter under saddle and western pleasure classes as well as making sensible trail riding partners. Several of his foals have been purchased as eventing and dressage prospects as well."  Honkytonk Wrangler is currently at Templeton Farms in dressage training with well-known trainers Ryan Torkkeli and Thomas Walker.

Avalon Appaloosas utilizes the services of Pioneer Equine Hospital, an SBS Affiliate Lab, located in Oakdale, California. They handle the collection, freezing and storage of the semen for Honkytonk Wrangler as well as the distribution of it within the United States and abroad. Blanny said, 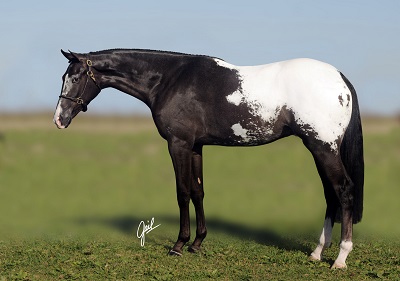 “Our stallion is in training and using frozen semen enables him to be collected during off times of the show calendar with little disruption to his program. We find it easy and expedient to inseminate our broodmares when using frozen semen. SBS is extremely professional and offers quality service to the discerning breeder. We have found the entire staff at SBS to be helpful, knowledgeable, and service-oriented.”

The frozen semen from Honkytonk Wrangler is also qualified for export to Canada, the European Union and Australia. So, whether in the USA or abroad, you can be sure these are not your “old fashioned” appaloosas but modern colored sporthorses stamped with color, size, and athleticism as well as kind and willing dispositions. Be looking for them in show rings throughout the world.