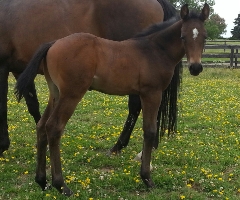 What happens when you breed a 22 year old maiden mare with frozen semen processed in 1989? It is no secret the first commercial client stallion whose semen was frozen by SBS was the 1984 Olympic medalist, Abdullah (Donauwind x Abiza). He was a beautiful grey Trakehner stallion owned by Terry and Sue Williams of New York. He passed away in January 2000 at the age of 29 years old. Recently, Sue contacted Paul Loomis to tell him a story about an Abdullah colt (photo left) born this year…fourteen years after the stallions death. Yet, that wasn’t the only interesting part of the story she had to tell.

The semen used to breed this mare had been shipped several years ago and had been in storage at Schickendanz Farm (breeders of Abdullah) in Markham, Ontario, Canada . Hedy Gervais who lives in Caledonia, Ontario contacted 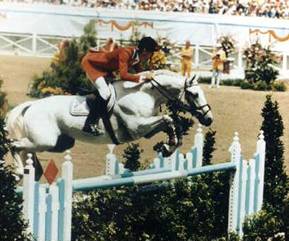 Sue about using the frozen semen to breed her 22 year old, maiden mare (Cee Cee Blue) who had never even been broke to ride.  Sue did her due diligence to caution Hedy about the chances of breeding such an older maiden mare…let alone with frozen semen. But Hedy was not deterred. The veterinarian examined the mare and found her fit for breeding. She was then bred on only one heat cycle with semen that had been frozen in 1989 and 1990. Fourteen days later the mare was checked in foal.

On June 21, 2014 Cee Cee Blue gave birth to a beautiful colt and Abdullah (photo right) continues to leave his legacy on the sporthorse world.