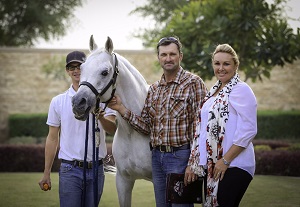 Future Farms in Australia, located on 70 acres within a thirty-minute drive to the airport in Melbourne, is the creation of Doyle and Kate Dertell (photo left). The love they have for the Arabian horse is the reason Future Farms was formed and why it has become one of the leaders in Australia. They have not limited themselves to one particular discipline but their horses perform in many disciplines from the show ring, flat racing and endurance. Though training is an integral part of Future Farms, they also have a very successful breeding program which includes a small broodmare band of both imported and domestic mares. However, as we will discuss in this article, the stallions of Future Farms are considered the cornerstone of their program.

Doyle grew up in Saskatchewan, Canada where his family owned and operated a beef cattle and horse farm. It was in the 1970’s that they purchased their first purebred Arabian horses and began their breeding program. Throughout his childhood he worked with the horses and had the opportunity to learn from some of the best Arabian horse breeders and trainers in the world. He traveled to Australia in 1997 and he now calls it home. Kate was practically born in the saddle as her mom had been showing horses for years. She worked her way through the ranks of Pony Club and then at 15 years old she owned her first purebred Arabian horse named Joe. He caused her to fall in love with the breed and there was no looking back.

Doyle has been breeding his own horses since 1993 and entered the Arabian horse world as a professional breeder and trainer a few years later. Together, their love for all disciplines and their ability to produce wonderful examples of the Arabian breed have put Future Farms on the map. As a result of their dedication they were awarded the Australasian Breeder of the Year for 2013 and 2014.

They have bred numerous national champions in all divisions within the show ring but also have a successful racing division with both endurance and flat race horses. Their goal in breeding Arabian horses is to keep it simple. As Doyle said, “We breed functional, beautiful, trainable horses that are good to be around and are good at what they have been bred to do. The Arabian horse is a very versatile animal, a family horse.” He said their horses are shown in hand as youngsters and then as they grow up they are shown under saddle in the show ring, running on the track or trekking through the endurance trails. Along with their many racing and showing accomplishments (Cava FF pictured below left and Sir Charming FF pictured above right), they feel some of their biggest accomplishments include the fact people all over the world are interested in owning their horses. As of today they have exported horses to the United States, Europe, the United Arab Emirates, Vietnam, Malaysia and New Zealand. 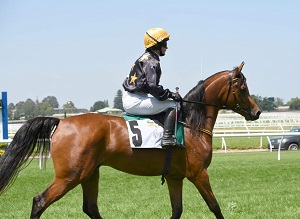 “All of our overseas quarantine semen is handled by SBS worldwide. SBS makes the job easy to ship our semen on time, every time. We chose SBS because, to be the best one has to work with the best!” 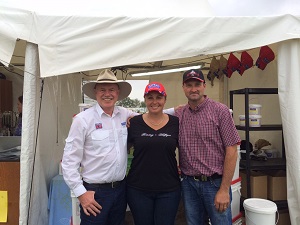 The use of frozen semen plays a very important role in the breeding program of Future Farms in several ways. It allows Doyle and Kate (pictured right with Steve Hurley of Tuffrock, a sponsor of Future Farms) to take advantage of overseas bloodlines by importing doses from stallions throughout the world. In addition, processing frozen semen from their own stallions provides them an opportunity to send their Australian genetics to foreign markets. Lastly, they have frozen semen in storage for their stallions as an “insurance policy” for those standing at their farm in case of illness, injury or death.

You can be sure that Future Farms, guided by the Dertell Family, will continue to make an impact on the Arabian horse industry for years to come whether it be in the show ring, on the race track or the trails of an endurance race.