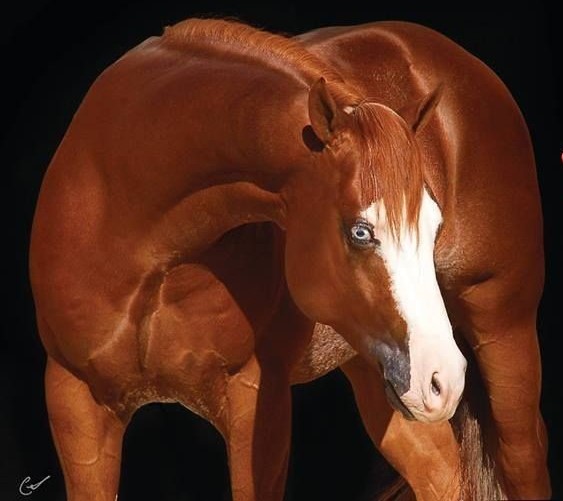 Karl Ludwig-Hollen began his career in the horse breeding business back in 1990 breeding Appaloosa horses and German sport ponies. His interest in western riding dated back to his first introduction to the American Quarter Horse while visiting a cattle ranch near Elko, Nevada in 1985. As a result, he began taking western riding lessons in the early 90’s. After he spent time visiting western horse shows he made the decision to focus on the sport of reining. He knew that in order to compete at the level he desired he would need to switch his interest solely to the American Quarter Horse.

His first Quarter Horse was a gelding that was a grandson of Genuine Doc. After a few more years he purchased his second reiner which was a mare out of Reminic N Dunit and Baroom Sister. Karl still owns this mare and she is in foal to Walla Walla Gunshine (Spooks Gotta Gun x Walla Walla Starshine) with an expected foaling date this April.

In October 2014 Karl was in search of his next reining horse. To accomplish this mission, he and his wife traveled to the Netherlands to the stable of Lukas Brucek. They were there to meet their friend and horse agent, Anne Schmitt of Superhorses. After riding several young horses Anne had in training at the facility Karl was unable to decide which horse would be the best fit. That’s when he saw Walla Walla Gunshine looking out of his stall. Karl had a feeling this stallion was the horse for him. Karl said, “I rode him and felt comfortable from the first second. He was easy to ride with strong maneuvers, perfect body, good mind and an interesting pedigree. So, we bought him!”

In 2013, Walla Walla Gunshine competed with Justin Mathinson in the NRHA Futurity in Oklahoma City where he was a Top 20 finalist in the Level 4 Open. Most recently, he was a 2017 NRHA of Germany Breeders Derby finalist in the Non-Pro Derby level 1,2,3 with Karl on board. 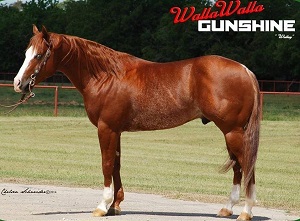 He also received his ROM in reining in just one show and has many champion and reserve champion titles to his name.

Karl’s goal for his breeding program is to produce a good minded athletic Quarter Horse. Walla Walla Gunshine’s oldest offspring are 2 years old this year. Though they have a bit of time before they enter the show ring Karl said, “The first offspring are good minded, easy to handle, have good bones and most of them have similar markings of their sire.” So, Karl is on his way to meeting his goal.

Walla Walla Gunshine’s frozen semen is processed by and stored at the SBS Affiliate Lab, SBS North Germany, in Lusche, Germany. Karl chose SBS North Germany on the recommendation from a friend. He said,

“SBS North Germany does a very good job with my stallion and his frozen semen. We use frozen semen for several reasons but believe it is hygienic and safe for both the mare and stallion.”

Walla Walla Gunshine’s semen can be shipped throughout Europe and is available upon request overseas.

Be sure to keep your eyes open for the offspring of Walla Walla Gunshine when they make their show ring debut in 2019!