Predominant Sires of the 2012 Olympic Horses 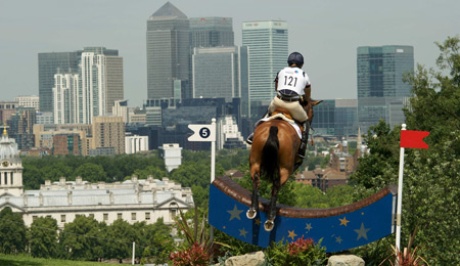 Here we take an interesting look at the predominant sires of the 2012 Olympic horses for all three equestrian disciplines. To collect this data we compiled an Excel spreadsheet of the horses that placed at the Olympics either Top 10 in the team competition or Top 20 in the Individual final. The sire, dam and damsire information was obtained from the Olympic Preview issue of The Chronicle of the Horse or the FEI database. The sires whose names appeared the most formed the basis of this article. The notable sires of jumping horses were Nabab de Reve, Quick Star and Baloubet du Rouet, for dressage horses it was Donnerhall, Sandro Hit and Ferro and for eventing horses Master Imp, Cruising and Heraldik xx.

Quick Star
1982 Selle Francais (Galoubet A x Stella/Nithard)
Quick Star sired two horses in the jumping shortlist, Star Power (CAN) and Big Star (GBR), and was grandsire to Castlefield Eclipse (SWI). Not included in our shortlist, but competing at the Olympic games was Gucci (AUS) also by Quick Star. Big Star was a member of the 2012 Olympic gold winning team from Great Britain and ridden by Nick Skelton placed 5th in individual competition. Competed by Meredith Michaels Quick Star had many wins in international show jumping and multiple placings in World Cup qualifying competitions 1992-1994. He is currently ranked #3 on the 2011 WBFSH Jumping Sire Rankings.

Sire to both Baloubet du Rouet and Quick Star was Galoubet A, he was also a very successful international jumper and breeding stallion. He won 19 International Grand Prix's and team gold at the 1982 World Championships and has sired >30 approved sons.

Nabab de Rêve and his Belgian rider Philippe Le Jeune were frequent winners on the international circuit such that in 2002 he was elected Horse of the Year by the Belgian people. In this year he helped Belgium win the bronze medal at the World Games in Jerez de la Frontera, Spain. He is currently ranked #9 on the 2011 WBFSH Jumping Sire Rankings.

Notable mentions:
Quidam de Revel (Jalisco B x Dirka/Nankin) deserves a notable mention as the sire of Nabab de Reve and as the sire of Verdi (NED) who won team silver. He is also the grandsire of the Nabeb de Reve offspring mentioned above, Vindicat W (GBR) who won team gold and HH Rebozo (BRA). This Selle Francais stallion is currently ranked #6 on the 2011 WBFSH Jumping Sire Rankings.

Landgraf, Carthago Z, Capitol I, Heartbreaker, Nimmerdor, Acord III and Contender were also notable sires repeated in the spreadsheet, particularly when it was extended to include grandsires.

Donnerhall
1981 Oldenburg (Donnerwetter x Ninette/Markus)
Donerhall sired Damon Hill (GER) who won team silver and placed 4th individually, Digby (DEN) and Donnperignon (DEN). He was also the damsire of Glock’s Undercover (NED) who won team bronze and placed 9th individually and the grandsire of Diva Royale (GER) and Desperados (GER) who both won team silver and placed 7th and 8th individually respectively. Donnerhall is one of the most successful and influential dressage horses of all time, having balanced a competitive international career, winning over 30 Grand Prix and freestyle classes, with the demanding duties of the breeding shed. He’s had a huge impact as a sire, in Germany alone he’s produced over 50 approved stallion sons and more than 35 State Premium Mares. He is currently ranked #7 on the 2011 WBFSH Dressage Sire Rankings.

1999 Sandro Hit became the six-year-old dressage horse World Champion, and won the German Federal Championships in Warendorf. He was also named the Best Young Dressage Stallion of 2000. He has created quite the dynasty as a sire - ten licensed sons came out of his first foal crop alone and many of his progeny have sold for record prices.

Ferro
1987 Dutch Warmblood (Ulft x Le Mexico/Brenda)
Ferro won team silver at the 1998 World Equestrian Games, 1999 European Championships and 2000 Olympic Games. In 2000 he placed second in the World Cup finals. Ferro is the grandsire of Valegro (through Negro) and Uthopia (through Metall), they became dressage superstars in the build up to the Olympic games, and now given their success at the Olympics will certainly become part of dressage history. Valegro and Uthopia won team gold for Great Britain. Valegro won individual gold for rider Charlotte Dujardin and Uthopia placed 5th individually with Carl Hester. Ferro was also the sire of Glock’s Undercover (NED) who won team bronze and placed 9th individually and the damsire of Painted Black (ESP). Ulft, Ferro's sire, was also the damsire of Jerich Parzival (NED) who won team bronze and placed 2nd individually. Ferro is currently ranked #4 on the 2011 WBFSH Dressage Sire Rankings.

Notable mentions:
Rubinstein I (Rosenkavalier x Antine B/ Angelo xx) makes our list through his contribution as a damsire to Damon Hill (GER) who won team silver and placed 4th individually, Rafalca (USA) and Santana (SWE). Rubinstein is yet another legendary dressage sire. An accomplished dressage performer, he had 40 wins at Grand Prix level, was a member of the 1996 Olympic team and sired >80 state premium mares and >90 approved stallions. His son Rohdiamant also features in our spreadsheet as the sire of Eremo Del Castegno (ITA) and damsire of Augustin (AUS). Rohdiamant is currently ranked #8 on the 2011 WBFSH Dressage Sire Rankings.

Master Imp
1987 Thoroughbred (Imperious x Tranquilla/Hul A Hul)
At the time of his death, Master Imp was considered the best sport horse producing TB stallion in Ireland; he has left behind a legacy of fantastic event horses. He sired at least three horses at the Olympic games, High Kingdom (GBR) who won team silver and placed 8th individually, Master Crusoe (IRL) who placed 7th individually and Ringwood Magister (USA). He is currently ranked #2 on the 2011 WBFSH Eventing Sire Rankings.

Cruising
1985 Irish Draft Sport Horse (Sea Crest x Mullacrew/Nordlys)
An international show jumper Cruising is reputed world wide to be the stallion with the best jumping technique. His many Grand Prix wins included 2nd at the 1999 World Cup Final, 8th at the 1998 World Championships and 7th at 1997 European Championships. At the Olympic games he sired event horses Electric Cruise (IRL) who placed 14th individually and Mr. Mendicott (USA) who paced 9th individually and was damsire to Master Crusoe (IRL) who placed 7th individually. He was also the sire of Flexible (USA) who placed 8th individually for Rich Fellows in the Olympic jumping competition. He is currently ranked #3 on the 2011 WBFSH Eventing Sire Rankings.

Heraldik xx
1982 Thoroughbred (Caramel x Heraldika/Cale)
Heraldik xx is one of Germany’s most successful Thoroughbreds at producing sport horses, particularly world class eventers. He sired two of the German event horses that won Olympic Gold in Hong Kong in 2008, so it’s no surprise to see him here in 2012. He sired FRH Butts Abraxxas (GER) and was damsire to La Biosthetique Sam FBW (GER), both won team gold and Sam won individual gold for Michael Jung. He is also the sire of Ekwador (POL) who competed in the dressage competition. He is currently ranked #1 on the 2011 WBFSH Eventing Sire Rankings.

Notable mentions:
Two stallions were distributed throughout all three Olympic disciplines - Argentinus (Argentan x Dorle/Duden II) and Contender (Calypso II x Gofine/Ramiro Z). Argentinus was the sire of Twizzel on the US eventing team and Rafalca on the US dressage team, he was also the damsire of Sandro Boy and grandsire of Augustin, both on the Australian dressage team. Contender was the grandsire of Ravel (USA) who finished 17th and damsire of Sancette (AUS) both competed in dressage, the sire of Bendigo (AUS) and grandsire of NZB Campino (NZL) who competed in eventing, and he was the grandsire of Codex One (GER) and damsire of Rosalia La Silla (MEX) in the jumping competition.