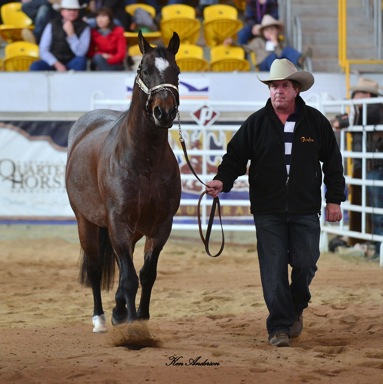 Ricky Glen (photo left), of Ricky Glen Cutting Horses in Western Australia, has been breeding horses for more than 20 years but his commitment to the equine breeding industry really began when he became the manager of Morning Sun Ranch.  Ricky and the owners of Morning Sun Ranch, Barry and Leah Ryan, made the commitment to purchase stallions and mares from the United States. Therefore, they all attended the NCHA Futurity sales in Fort Worth. They purchased a total of three colts, one yearling and two weanlings. Ricky said, “When Peptos Stylish Oak, a weanling son of Peptoboonsmal, came into the ring we had not even inspected him prior to the sale. However, when the bidding pulled up, we had one bid and he was ours. The rest is history.”

Their goal was to establish a state of the art breeding centre on the West Coast of Australia. The majority of the mares bred to their stallions are done so with either cooled or frozen semen since most of the cutting horse industry is located on the East Coast of Australia and in the United States. Morning Sun Ranch also ran one of the largest embryo transfer programs in Australia for about three years.

Peptos Stylish Oak (photo below right; Peptoboonsmal x Moms Stylish Kat) was only able to be shown on a limited basis due to an injury which required his hock be fused. However, he has gone on to sire progeny both in Australia and the United States which have earned more than $3 million dollars. This has earned him the accolades of being listed as a leading sire of NCHA money earners in Australia and placed on the Equistat sires list in the USA for the past several years. His first breeding season in the United States earned him the Leading Freshman Sire Award from the American Quarter Horse Association (AQHA). 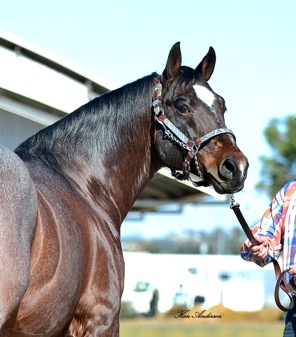 According to Ricky, Peptos Stylish Oak was one of the first Australia based cutting horse stallions to shuttle to the United States each year as well. He stood at several cutting horse breeding facilities in Weatherford, TX while in the USA. However, the stallion has not traveled to North America for the past four years due to his age. When his supply of frozen semen began to run low in the United States they decided to send Peptos Stylish Oak to Dr. Angus McKinnon of Goulburn Valley Equine Hospital to have frozen semen processed for export. Ricky said, “Dr. Mckinnon processed the frozen semen in the correct way to ensure that it was very viable and would have the opportunity to get mares in foal. This has been proven very successful. The following year we sent Peptos Stylish Oak back to Goulburn Valley Equine to have his semen frozen for export to New Caledonia and whilst he was there, he was frozen for the domestic market as well.” Ricky went on to say,

“The two SBS affiliate labs here in Australia, Goulburn Valley Equine Hospital and Tamworth Equine Veterinary Centre, are under the management of world class vets. They make every effort to provide the best care for the stallions and mares sent to their facilities for breeding.”

Ricky has had frozen semen processed from Peptos Stylish Oak due to the export market but also as a backup in case anything should happen to him. This will ensure mare owners will have access to him and his genetics for many years after his death.