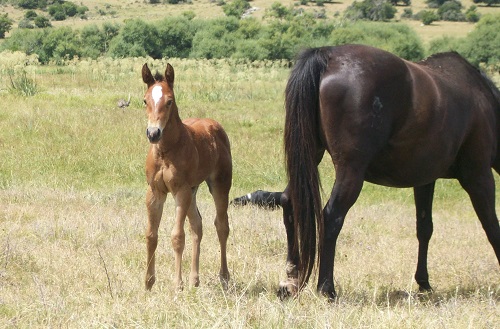 Each year, the QSP offers a specified amount of money which they award to livestock producers in the United States to assist in the costs associated with processing and exporting frozen semen. The AQHA then partners with US Livestock Genetics Export (USGLE) to organize the USDA funding which the USGLE helps facilitate for not only the equine industry but also for the beef, dairy, swine and small ruminant industries. In order to be awarded the funds, applicants must first complete the grant application process. For this particular shipment, Sierra Kane the Manager of International Activities with the AQHA, was the one to fulfill this task.

The first step for Sierra was to inform the AQHA’s international affiliate members about the grant program to determine if any of them were interested in using frozen semen. The Czech Quarter Horse Association (CZQHA) expressed their desire to be the recipient of such a shipment. Then, she was tasked with traveling to the Czech Republic in the Spring of 2018 to visit with CZQHA leadership and their breeders. Sierra found their leadership to be strong, the breeders interested in using the frozen semen and fantastic breeding facilities. Upon her return to the United States, she began the QSP application process in the Summer of 2018. As a result of her diligence and hard work, the AQHA was granted the funds for the project.

After choosing the stallions, the CZQHA needed to select which mares they would breed to the selected stallions. Dr. Anna Morrison, the Chief International Officer and Chief Foundation Officer of the AQHA, helped provide guidelines for their mare selection process. Dr. Morrison said, “Our goal was not to dictate the process for the mare or stallion selections but to act as facilitators and a sounding board if needed.” In the end, 37 mares have been selected to be bred with the frozen semen from these stallions during the 2020 breeding season. 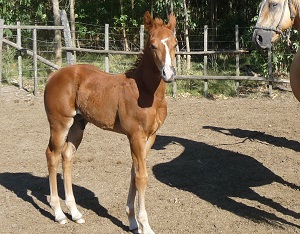 However, this isn’t the first USLGE shipment to include stallions from the 6666 Ranch. The initial shipment was several years ago in 2008 and the destination was Uruguay. When asked why he felt it is important to participate in this program, Dr. Blodgett of the 6666 Ranch said,

“I think it’s a benefit for both the AQHA and the 6666 Ranch to have an international presence for the American Quarter Horse. From the moment the AQHA approved the use of frozen semen, we began processing it for export so we can meet the demand, wherever that may be.”

Since that shipment, Dr. Blodgett had the opportunity to visit Uruguay and Dr. Charles Coubrough who helped facilitate that shipment for his country. Dr. Blodgett said the following about the offspring he saw that resulted from that shipment, “ It was rewarding to see the mares that had been bred to our stallions and the impressive offspring that resulted from those crosses .” We also reached out to Dr. Coubrough for his impressions on how the new genetics impacted their breeding industry. He said,

“My personal feeling is that the project has had a tremendous impact on our Quarter Horse bloodlines in Uruguay. Some of the offspring have won several halter and performance shows and many have become breeding stallions and broodmares.”

The AQHA has been awarded another grant through this process in which SBSW will be processing a shipment of frozen semen from racing American Quarter Horses to Argentina for their 2019 breeding season. Select Breeders Services looks forward to our continued relationship with the AQHA in helping facilitate frozen semen shipments to foreign countries through these programs.

Photos of offspring in Uruguay provided by Dr. Charles Coubrough