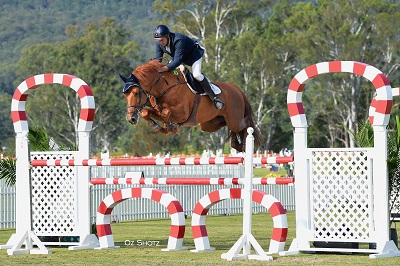 It was 15 years ago when Richard and Wendy Keddell noticed that most of the jumping horses in New Zealand were either Thoroughbreds, Stationbreds and Clydesdale crosses. They took this as an opportunity to begin breeding quality European warmbloods within New Zealand and thus their journey with Mount View Sport Horses began. Their facility sits in the foothills overlooking Tauranga harbor and Mount Maunganui and is an ideal setting for breeding, raising and training warmbloods for showjumping, dressage and eventing competition.

It all began in 2002 when they imported three broodmares and one stallion from the VDL Stud in Holland with the goal of producing jumpers that would one day compete successfully on the international level. At the same time, they also purchased Pico Bello (Calvados x Zellie) and Charming Princess (Cordeur x Helianthus) from separate stables in Belgium. Wendy said, “We breed for good character and performance. Our horses are very rideable and talented. We have many happy amateur riders as well as professionals riding horses we have bred.”

One of the stallions they initially imported from Holland is their resident stallion, Senator VDL (photo middle right; Corland x Falonie). In 2016, he was ranked 14th in the WB FSH-Sire Rankings for eventing stallions. His son, Balmoral Sensation (out of the mare Aberzanne) was chosen to represent New Zealand in the 2016 Rio Olympics where he finished 6th in the individual competition. 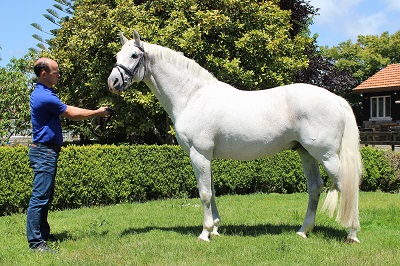 After their initial import of horses from Holland they decided to expand their breeding program by importing Holsteiners from LVP Stables in Belgium and now three of their four resident stallions are Holsteiners. Carrado MVNZ (photo top left; Cassini II x Noah) was the top stallion and overall top scorer of the Australian Classification Tour 2017 with an 83% and he was awarded with a Premium/Excellence Rating. Leopoldo MVNZ (Clinton I x Sunday) is now 7 years old and is in training and competition with Brook Dobbin of Victoria, Australia. In the Holsteiner Classification Tour he scored 81% and received Premium/Excellence rating. Lincoln MVNZ (photo bottom right; Diarado x Sereedom VDL), based in New Zealand, will turn 7 years old this year and won the Style Prize at the Young Horse Show in 2015. Though the progeny of these up-and-coming Holsteiner stallions are too young to compete they are looking very promising.

“We value the expertise, professionalism and efficiency of SBS. We also appreciate how they support their breeders and the advertising they provide through the SBS Stallion Guide.” 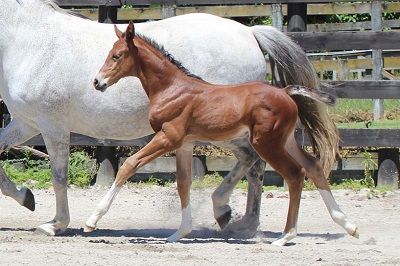 Wendy went on to say, “Frozen semen is very convenient to use when our stallions are competing. They have very good quality frozen semen so it’s a good option for our mare owners. Also, the mare owners can breed when needed rather than waiting for a shipment of cooled semen.”

The horses of Mount View Sport Horses have been competing in Australia for the last three seasons and have achieved many awards. They also have three horses who are of age which have been selected for Equestrian Australia squads: Cervelt MVNZ (Chin Chin x Charming Princess), Carrado MVNZ and Britannica MVNZ (Silverstone x Sereedom). Other notable offspring include: 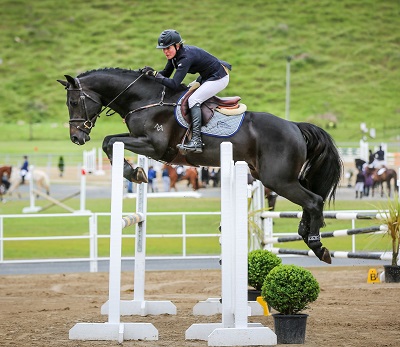 “We have done very well in the Jumping with the Stars competition for three years running, thanks to Caroline Price.  This includes Montana MVNZ winning in 2016 and runners up, Lafayette MVNZ in 2015 and Narnia MVNZ in 2017.”  Mount View Sport Horses also received several HHANZ Classification Tour awards including Top Stud Award, Best Colt Foal, and Best Filly Foal in 2013 as well as Top Stud Award, Champion Mare, Champion Filly and Champion Colt in 2013.

Richard and Wendy have spent many years developing and growing their breeding program. The dedication and love they have for their horses and their sport is evident in the offspring they have produced. There is no doubt that Mount View Sport Horses will continue to have a presence for years to come in not only the sporthorse venues of New Zealand but throughout the world.