Deceased Stallions and the Use of Frozen Semen 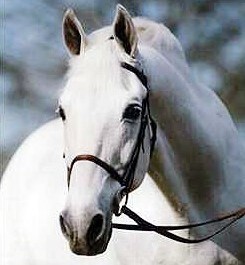 Many stallion owners have the foresight to have frozen semen processed from their stallions while they are young, during their prime reproductive years. It may be too late if one waits until after his show career is complete, he is older or for any other reason because there is no guarantee of tomorrow. Waiting may turn into a situation of “I wish I would have…”. When semen is frozen earlier in a stallion’s life, it becomes a tool for the stallion owner to not only perpetuate the genetic line of their stallion but also allows for continued income after the stallion has passed away. Also, some owners have looked at frozen semen as an insurance policy for their valuable stallions. Regardless of why or when the semen is frozen, the management of it will likely change once he passes away.

Generally, Select Breeders Services (SBS) recommends mare owners and veterinarians utilize the Timed Insemination Protocol when breeding with frozen semen from stallions. The protocol is a useful tool for veterinarians to use if the stallion is still living and there is a possibility of obtaining additional doses of frozen semen. However, once a stallion passes away the situation changes and the semen in storage at the time of his death must be properly managed in order to efficiently utilize the remaining doses. In these situations, stallion owners may decide to limit the number of frozen semen doses allowed per breeding contract in order to maximize the use of the frozen semen. The limited number of doses provided to the mare owner may also put pressure on the veterinarian to breed the mare closer to ovulation and could keep them from the luxury of using the recommended timed insemination protocol. In these situations, the quality of the frozen semen becomes an important factor. This is also when a relationship between SBS and a veterinarian experienced in breeding with frozen semen becomes invaluable to both the stallion owners and their mare owners.

Just one example of such a relationship is the one between SBS and Dr. Andy Schmidt previously at Wisconsin Equine Clinic and Hospital (WECH). Dr. Schmidt has been utilizing the services of SBS for nearly twenty years. During this time the mobile labs have made trips nearly every year to freeze semen from the stallions owned by WECH clients. They have also received numerous shipments of frozen semen doses to breed client mares at their facility. Over this time period, Dr. Schmidt has had great success breeding mares using frozen semen from deceased stallions who were frozen by SBS. Some of which were frozen nearly 20 years ago.

When asked how he manages the frozen semen of deceased stallions Dr. Schmidt said, 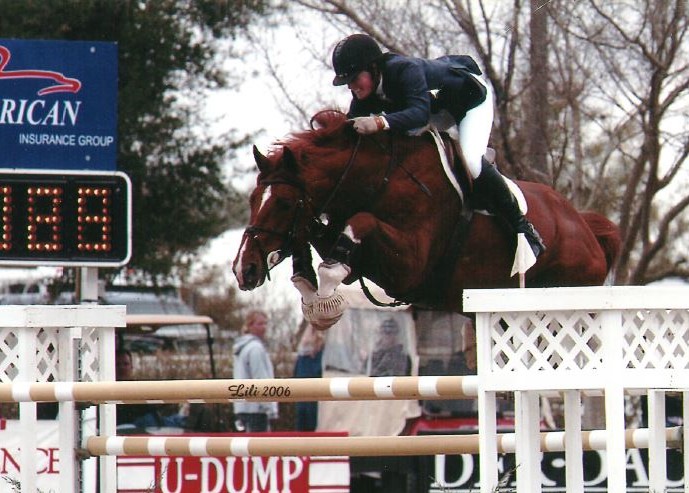 “I routinely split doses when the stallion is deceased and try to make a suitable plan with the owner prior to starting. I would say this is determined by the quality information that comes with the semen and the reputation of the freezing lab. The worst is when you have no information, second worst is inaccurate information. The best scenario is when you have SBS semen with the quality control and reliable post-thaw information that goes with it. I talk to owners about starting with a ‘full dose’ and if that works then we can start working our way down in straw numbers. However, if the post thaw motility (quality) is reported as good by a reputable source, like SBS, then I am more likely to use less semen initially.”

Dr. Schmidt went on to describe how he manages mares when using frozen semen from a deceased stallion. “When the stallion is deceased, I check the mares at least every 2 hours during the 36-40-hour range after an injection of Deslorelin or hCG. When we are breeding with a single straw most all mares are bred within the 2 hours post ovulation. This avoids breeding mares that ovulate abnormally, go anovulatory and those that persist or did not respond to Deslorelin or hCG injection.”

As mentioned, Dr. Schmidt has had great success with frozen semen from deceased stallions. He, along with SBS, recommend freezing semen from stallions when they are younger. This provides the best opportunity to produce good quality frozen semen in contrast to waiting until he is older when his semen quality may be declining. Here are just a few examples of why freezing semen from a stallion when he is young is beneficial to the stallion owner.

The first stallion frozen commercially by SBS was the 1984 Olympic Gold and Silver medalist, Abdullah (pictured top left; Donauwind x Abiza), owned by Terry and Sue Williams of New York. After the 1984 Olympics, the Williams’ began exploring the possibility of freezing semen from Abdullah to satisfy requests from breeders around the world who were anxious to breed to the stallion. His semen was frozen for many years and a large inventory of frozen semen was banked and has been responsible for the production of foals all over the world. Abdullah passed away in 2000 at the age of 29 years old. His semen is still being used 16 years after his passing and you can read about one of his recent foals in our article Colt Born 14 Years After Stallion’s Death.

One of those deceased stallions is the American Saddlebred World Champion Five Gaited Stallion, Attache’s Liquid Asset (pictured below; Attache x Mona Denmark). He was very successful in the showring as a saddle horse and later in his life he won point championships in fine harness. He spent most of his early years standing at stud in Kentucky.  His owner, Sharon Vuinovich moved him to Wisconsin to improve his quality of life in a small farm setting. She said, “I have a lot of joy knowing he produced many top-quality horses including Attache’s Royal Asset and Trust Fund who are both currently top American Saddlebred stallions.” 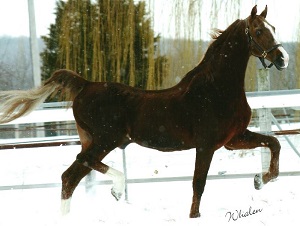 Sharon began freezing his semen in 2000 when he was 19 years old and continued to do so until he was 26 years. Dr. Schmidt added,

“My one regret is that we started freezing his semen too late, when he was 19 years old. No doubt, as a result of our procrastination we missed an opportunity to freeze the best quality semen he could produce.”

To date, he has produced 185 registered get which includes 32 ribbon winners at the Kentucky State Fair (known as the ‘super bowl’ for American Saddlebred horses). His legacy will continue to live on through the use of his frozen that remains in storage.

Online (pictured above right; Concorde x Anna) was a Dutch Warmblood jumper stallion that was born in 1996. He was owned by Arnold and Kate Bomgaars when he passed away in 2012 due to feed toxicity at the age of sixteen. During his showjumping career, he won ten Grand Prix events and had a number wins in amateur classes. He has produced numerous young horses who have made it to the jumper finals. Arnold and Kate had his cooled semen shipped for many years but also had the foresight to freeze his semen at the ages of 4 and 12 years old while the SBS mobile labs were processing frozen semen at WECH. Kate said, “We froze him so we could have him forever. Online passes along amazing rideability, great brains and trainability in his offspring. The frozen semen has allowed us to keep trying new crosses without a rush.” Because of their foresight the offspring from Online will grace the show ring for many years to come. 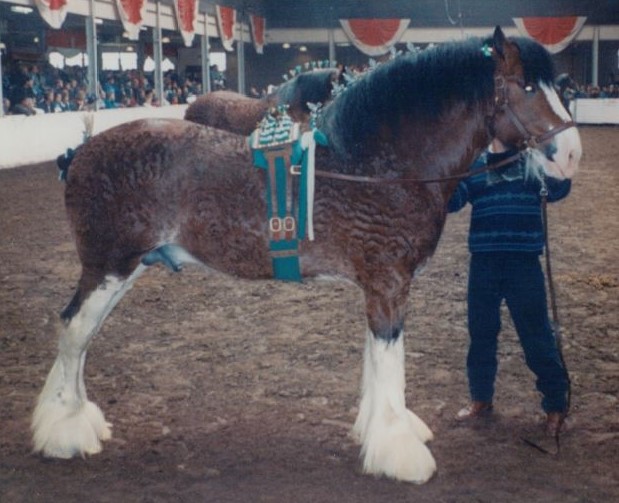 Hillmoor Fusilier (Ayton Perfection x Craighead Nectarine) was born in Great Britain in 1989. He remained there until he was two years old when he was exported to Canada. When he was ten years old he was purchased by Sharlene and Richard Pasko of Wisconsin. His top achievement (pictured right) during his lifetime was being crowned Champion Stallion as a five year old at the Royal Agricultural Winter Fair in Toronto Canada. Sharlene owned him until his passing in 2008 at the age of nineteen due to colic.

In 2001, when he was twelve years old, Sharlene and Richard took Hillmoor Fusilier to WECH for the SBSW mobile lab to freeze his semen. During the two-week period he was collected 6 – 7 times. This was the only time during his life in which his semen was frozen. Dr. Schmidt said, “His frozen semen has worked over and over with low doses of 1 – 2 straws using deep horn insemination. This has allowed the owner and clients the ability to breed mares while conserving the frozen semen. The remaining semen is in high demand due to the many recent wins of his weanlings and yearlings.” His offspring have received many Champion and Reserve Champion awards since his passing. One of his colts, Robyncroft Torch, was the record selling Clydesdale at the 2016 National Sale when he sold for $60,000 as a four year old.

The moral of this story is that if you think you want to freeze semen from your stallion, don’t delay. Many stallions can be trained to collect and test freezing performed at an early age, especially if they are not in full training or have a break in their schedule. If the results of the collection and test freeze experience are encouraging (stallion behaved and froze well) then continue to freeze and store semen. If not, we suggest waiting a few years then try again. However, many performance stallions adapt well to a training/show schedule in the spring and summer with collection/freezing in the fall and winter. With this schedule the frozen semen can be available for mares in the Spring once the stallion goes back into training and the show ring. It also provides the ability to test breed mares in the Spring to determine the stallion's fertility. So, don’t delay in taking advantage of this technology. Develop a plan to prepare for the future and protect your investment. You may be interested in our article, Why Freeze Stallion Semen? to determine other reasons stallion owners and agents decide to freeze semen from their stallions.